Health benefits of feeding your chickens garlic, scientific study results, and great deals on garlic.
Garlic is said to be a laying stimulant that can be used in various ways. Feeding raw or cooked garlic and the husks to your chickens is the best way to get the vitamins from it but will also impart this flavor into their eggs. Mincing, slicing, or juicing the garlic and using it as a spray in nest boxes will have the same effect, is also said to reduce blood pressure so it has a calming effect on chickens. Garlic bulbs sprout quickly and are easy to grow. Garlic is well known for it's health benefits in humans such as lowering blood pressure, use as an antioxidant, detoxifies the body, reduces the chances of getting a cold, lowers cholesterol levels, slows hardening of arteries, less chances of getting heart disease, and improving exercise performance​, so it stands to reason that feeding garlic to chickens will bring about these same healthy benefits but did you know that feeding garlic to your chickens can also reduce the amount of lead in their blood which means healthier chickens any way you look at it. See study results and more about feeding garlic to your chickens below. 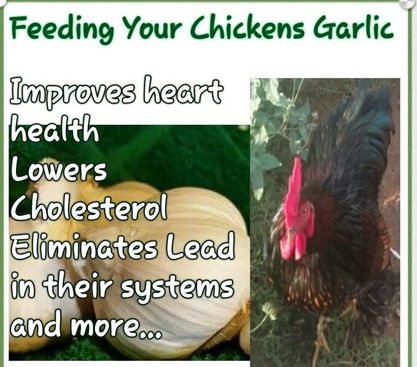 Study results from the Dept. Vet. Pharmacology, Faculty of Veterinary Medicine, Cairo University, Giza, Egypt showed a reduction in lead in the feces from chickens which would significantly reduce the amount of lead pollution to human consumers. Several groups of chickens were given lead and garlic, some as a post treatment and some at the same time as the lead. All of the groups showed a reduction in the amount of lead in the blood, meat and feces (1).

Study results from the show that "Dietary supplementation with garlic led to decreased total and low-density lipoprotein cholesterol levels in broiler chickens". Lipoproteins are complexes of lipid and protein meaning the way lipids travel in the blood. Cholesterol, is a building block of the outer layer of cells (cell membranes) and is transported through the blood in the form of water-soluble carrier molecules known as  lipoproteins. The study showed that supplementing garlic lowered the saturated fatty acid and raised the unsaturated fatty acid levels in broiler chickens, a better texture and flavor in the birds who were given garlic as a dietary supplement in comparison with broiler chickens who were not given garlic bulb or husks. The study also revealed that feeding garlic husks brought about the most significant effects (2).
More Natural Ways to Keep Chickens Healthy
References:
​1. Dept. Vet. Pharmacology, Faculty of Veterinary Medicine, Cairo University, Giza, Egypt.(Apr. 1994).  Effect of Garlic on lead content in chicken tissues. ​http://www.ncbi.nlm.nih.gov/pubmed/8205968​
2. Division of Life Resources, Daegu University, Jilyang, Kyungsan, Kyungbuk, 712-714, Korea. (Feb.1988). Effect of dietary garlic bulb and husk on the physiochemical properties of chicken meat. http://www.ncbi.nlm.nih.gov/pubmed/19151355