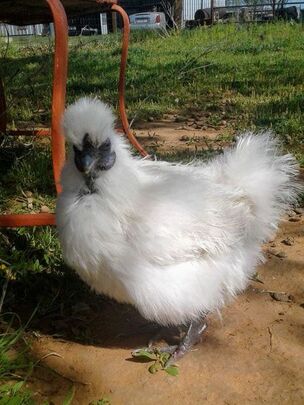 Lady Silkie-April 2, 2019
Lady Silkie arrived at Chicken Heaven On Earth unable to walk and with multiple health issues due to poor living conditions in her previous home. She was the only bantam chicken in a flock of standard sized breeds. She arrived crippled, loaded with chicken mites, poultry lice, and scaly leg mites. had worms, bacterial infection and fungal infections and her feet were crippled from ingrown feathers which had literally grown the wrong way and got infected. Having been fed mostly whole corn as a main feed staple in her former home, Lady Silkie also suffered from a severe vitamin deficiency. I went to work on this tiny little sick hen and each day she has shown progress as you will see in the following video's. There was little hope for survival but survive she did even though most people told me to kill her, I could see the hope in her eyes, and her willingness to fight for her life is obvious. See Lady Silkies Road to Recovery below.

After getting a nice warm bath and blow dry, it is time to examine her to see why she cannot walk and falls over sideways when she tries to. She sits way back on her rear like a human would with her legs sticking straight out. Update: After her recovery she no longer sits like this. Scroll down to see her recovery progress videos. Lady Silkie's First Day

Lady Silkie Getting Her Bubble Bath 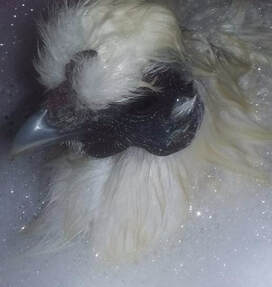 Lady Silkie taking a Bubble Bath
Lady Silkie seems to enjoy her long bubble baths and soaking her feet in warm salt water. She seems much happier now. Of course, being a rescued chicken she gets quite a bit of attention. She responds lovingly cooing and making purring sounds when she is happy.Scroll down to see how much she loves coffee and check out her progress as she learns to walk again.

Lady Silkie After One of her Physical Therapy Sessions

Lady Silkie never gave up the fight. She wanted to walk and it is obvious in this video that even though she was struggling, she has what it takes to get well and the next two show just how great she did. Lady Silkie's First Week See more updates on her progress below.

Lady Silkie helped herself to my coffee I had set on the ground so I could hold her up as she struggled to relearn how to walk. Check her out in the next video as she has learned to walk and made new friends.

It wasn't long and Lady Silkie was showing signs of being lonely for other chickens. Once she learned to walk again in the front garden, she would go to the fence where Lady Frizzle and Mr. Snowie play during the day. It became obvious they wanted to all be together. I put her in the pen watching Lady Frizzles reactions closely. Lady Frizzle was brought here after a brutal skunk attack and she survived it with round the clock care. Mr. Snowie has been with us many years now. He was also a rescued chicken who made a full recovery and Mr. Snowie & Lady Frizzle had their first baby chick-Lil' Snowball. Now Lady Silkie doesn't have a silkie man rooster of her own but Lady Frizzle doesn't seem to mind sharing Mr. Snowie. Here they are in their nighttime and rainy day pen.

Nobody believed Lady Silkie would live and many told me that if she did survive her quality of life would be diminished, many told me to kill her and I could not do that. Instead, I work with her every day and her sheer will to survive and try shows in every step she makes in this video. I am so proud of my little sweet Lady Silkie.

Vitamins and Probiotics for Chickens-Best Buys

AT CHOE that's what we do..we rescue and love chickens and we love a good chicken rescue story and enjoy sharing them with our friends. Check out more successful rescues like a chicken who got a prosthetic foot, a broiler hen rescued from a religious ritual, Lady Frizzle rescued after a skunk attack, The doughboys-five baby chicks found trapped in bread dough, rescued battery hens and many more.

Find out more about Silkie Chickens