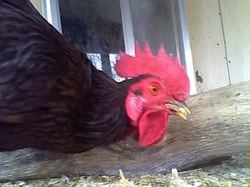 Lil' Man was in such poor condition that he did not have any feather's, only spikes remained from the feathers on his wings. He also had open sores all over his body where he had been pecked by the large Rhode Island Red rooster he had been caged with. It was hard for him to be handled for his treatment because he had so many injuries, he trembled in fear as we doctored his wounds, speaking soothing words of comfort to this tiny bird who lay on his side in the bottom of the cage trembling in fear, and who did not appear as if he had long to live.
His owner did not know he was a rooster and put him in a small cage with a large game cock. The game cock raped him and tried to kill him for at least three days before we got the call telling us he was in trouble and would die if someone did not check it out, the caller told us. CHOE owner Rev. Penny Hibbitts made a "pretend" polite visit to the home, showing interest in seeing the man's chickens while acting as if they were so neat, she just had to see. What she saw was heartbreaking and she offered to purchase the poor, beaten down Rhode Island Bantam.
The former owner said "You can have him for nothin' he looks like he will probably die anyway, don't know what's wrong with him."The poor almost lifeless bird's head and comb was swollen and his eyes were swollen shut with eye worm.There were very few feathers left on his wings, they hung by his side looking like thin rows of spikes. His walk was hobbled by scaly leg mites
He was rescued  and taken to Chicken Heaven on Earth. Within three months he was nursed back to health, had grown most of his plumage back as you can see in the  video and the before and after pics. When we first got him he was terrified and did not crow in the mornings. At the end of two months of antibiotics, pain medication, antibiotic ointments and anti fungal treatments to treat his wounds and skin condition and then he had to be treated for scaly leg mites and eye worm as well. After continuous round the clock care and many prayer's...
Poor little guy made a miraculous recovery. Not only does he have all of his feather's back but he can say his new name "Lil' Man" and does the neatest back flips you ever seen. He struts around with the ladies and flirts all the time by chirping and ducking his head down and fluttering his wings out. CHOE has had him for two years now and Lil' Man is running the show at Chicken Heaven on Earth!
​Update on Lil' Man 2010
Lil' Man is a character, he loves the ladies and takes very good care of them. We do not get a lot of hens here at Chicken Heaven On Earth rescue but for the few we do have-Lil' Man is king. The ladies love him and I feel very secure leaving the hens under is watchful eye. Not one lady hen was ever lost or harmed during his watch. If he sees a potential predator like a hawk or strange dog or cat he rounds all the girls up and puts them in the hen house by frantically running wildly in wide circles around them and sounding off screeching which sounds like, "Help Lil' Man" and he says it very clearly. We come running with a shotgun when we hear that sound and whatever is after Lil' Man's ladies is going down. By the time we get out there he has all the girls in the hen house and he is standing bravely at the door-doing back flips in attack mode and will not let anyone enter his hen house, until the predator or tresspasser has been dealt with.
Update on Lil' Man Dec. 2012
After years of loving service at Chicken Heaven On Earth working as mascot for chickens in the news at the The Weekly Crow-Lil' Man has passed away. He died Dec. 20, 2012. Words can not express the sorrow we feel losing this happy, flirty, loving little man. We no longer feature The Weekly Crow on our website but you can easily find his facebook page called The Weekly Crow
More Rescued Chickens