Here you will see ways to protect your chickens from weasels and the basic information you need to know about this cute but vicious little predator.
If you have weasels in your area they can quickly become a deadly threat to your chickens. Weasels are carnivores which means they eat other live animals. They usually prey on mice, rabbits, rats, chipmunks, and have been known to kill and eat baby chicks and small chickens like Bantams. They have also been known to mutilate and kill full grown standard size chickens. If you live close to a body of water, you are more likely to have an encounter with a weasel or mink since they tend to hang out near water and a food source (which is often on farms) due to the ease and availability of a quick meal.
What Weasels like to eat:
​Weasels prefer to eat mice and rats and usually will not bother chickens, eat eggs, and other farm animals, as long as there is a steady supply of mice, rats, rabbits, voles, frogs and wild birds. If you collect your eggs daily and control the mouse and rat population weasels (and snakes) are less likely to be attracted to your chicken coop in the first place but once they have found food there, if you remove their food source, you need to have your chickens well protected. A secure coop, electric fencing, a good guardian dog or two and a few good cats (who are mousers will generally keep the mouse, rat, and gopher population down if not eliminate them all together). If you keep rabbits as pets or for food, do not keep them in or near your chicken coop as they will attract weasels especially when new baby rabbits are born.
Animals that prey on weasels:
​Dogs, cats (snakes and owls too) will kill weasels so if you have dogs and cats outdoors at night weasels will most likely not come around, but there again, they are sneaky and can often find ways to get around guardian dogs and cats if the weasel is hungry enough, in which case, you may need to take more extreme protective measures which are described below.

How to Tell If a Weasel Is Killing Your Chickens 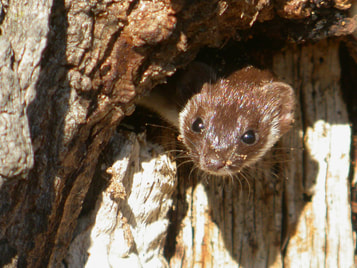 Chickens give you clues that a weasel is nearby:
​If there is a weasel or other predator threatening your chickens your hens may give you a clue. Sometimes, hens who are normally good layers will stop laying eggs because they can sense danger and this causes them stress. Chickens may make a low growl sound if they sense a weasel or other threatening predator is nearby. If your birds seem stressed or nervous there is usually something very wrong.
How to tell if a weasel or mink killed your chicken:
​Weasels usually attack smaller chickens but have been known to rip a full size chicken's head off. You may find birds with damage on their heads or feathers. Weasels, like minks, simply like to kill. It is not uncommon for a weasel to get into a chicken coop and kill the whole flock. Sometimes after a weasel attack, you may notice the bird has been ripped open and their entrails are gone or the head is missing. Look for Weasel Footprints:
A weasel has a very distinct walk and foot pattern. "The weasel’s forelegs also are notably short. They have short legs on a long, slender body which may account for the long-tailed weasel’s (Mustela frenata) distinctive running gait. At every bound the long body loops upward, reminding one of an inchworm. In the typical bounding gait of the weasel, the hind feet register almost, if not exactly, in the front foot impressions, with the right front foot and hind feet lagging slightly behind. The stride distance normally is about 10 inches (25 cm)" (Weasel control and management. 2019).
Look for a Weasel Den:
"A typical den has two surface openings about 2 feet (61 cm) apart over a burrow that is 3 to 10 feet (0.9 to 3 m) long. Other weasel dens have been found in the trunk of an old uprooted oak, in a bag of feathers, in a threshing machine, in the trunk of a hollow tree, in an old mole run, a gopher burrow, and a prairie dog burrow" (Henderson and Stardom 1983).
Look for Signs or Smells of Weasel Spray:
Weasels will spray to mark their territory so if they are in your area at night, you may notice a horrible smell just like skunks do, and during the day you should look for signs of a thick, yellow, oily substance (Weasel Facts. 2019).

Are There Weasels Where You Live?

Just the thought of a weasel attack on a chicken coop makes my hair stand on end, so the first thing I checked was to see if weasels might live anywhere near me. Weasels reside in many areas. For example, in North America there are 3 species of weasels. "The most abundant and widespread is the long-tailed weasel.  Weasels in parts of Kansas, Oklahoma, Texas, and New Mexico have a dark “mask” and are often called bridled weasels. The short-tailed weasel occurs in Canada, Alaska, and the northeastern, Great Lakes, and northwestern states, while the least weasel occurs in Canada, Alaska, and the northeastern and Great Lakes states" (Weasel control and management. 2019)..

Best Bait to Use to Catch a Weasel In a Trap

If the signs mentioned indicate that you have weasels it is time to set some traps (make sure you spring the traps before letting your chickens or other animals out to play). On the nights you set traps make sure all of your guardian animals are indoors and that no water or other food sources are available. Weasels are more likely to be attracted to your trap if you use fresh meat for bait like raw liver, raw fish, wet cat food, eggs, raw chicken or chicken entrails. See more below.

Scroll down to see best ways to protect your chickens from weasels and best buys on weasel traps.

More Ways to Protect Your Chickens From Weasels 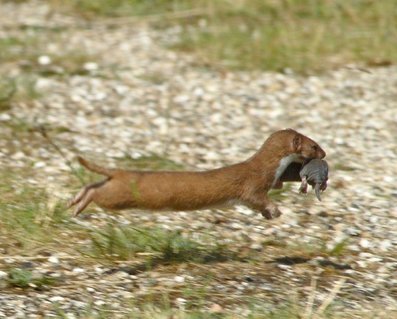 Closely examine your coop and run for small holes where a weasel might squeeze in.
Securely attach hardware cloth at the bottom of the coop and run extended out 12 inches on the ground and 4 inches up the outside of the coop and run to prevent them from digging in. This method will protect your birds from other predators as well. I like to pour an inch or two of  quick concrete on top of the mesh to deter them from digging all together and it prevents the hardware cloth from deteriorating over time.
Keep all feed secured in non rusting metal containers, trash cans, or bins. (Mice and rats can chew through plastic and wood).
​Set weasel traps.
Set up electric fences. I use portable solar powered fencing which allows me to move it when I move the chicken coop.
Use solar powered predator lights.
Use owl and hawk decoy's with light up eyes. Owls and hawks prey on weasels so if the weasel thinks an owl or hawk is there they are less likely to come around.

What you need to know about setting weasel traps 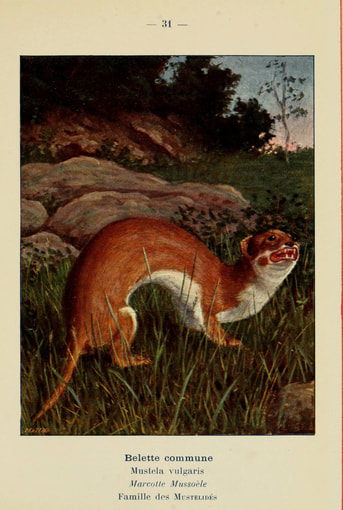 When setting traps use an old pair of gloves you use for cleaning your chicken coops so you do not get your scent on the traps or bait.If you accidently get your scent on the trap, it may take a few days before your scent wears off.
Don't get discouraged if you do not catch one right away. Weasels are smart. You will need to make your trap look as natural as possible by covering it with brush or leaves.
You can leave a trail of wet cat food going into the trap.
If possible tie your bait to the back of the trap but not so close that they can just pull it through the grates.
Once you have trapped a weasel you should call your local animal control to dispose of it. Weasels carry diseases that humans can catch. If you find yourself in a predicament where you have to move and relocate the live animal in the trap yourself be extremely careful, wear gloves which cannot be bitten thru. If you get bitten go to the emergency room of your local hospital immediately.
If you decide to shoot the weasel inside the trap, keep in mind the bullet may destroy the trap if you do not get close enough. The best way is to push the barrel through one of the grates if it is a wire trap. If you kill a weasel in your trap it is not likely that you will catch another one in it unless you clean it properly. Scrub the trap down using dish soap, rinse it well and let it dry in the sun. Dip it in river or lake water if possible and let dry again, this will remove the scent of the dead weasel, you and the soap.

How to Set A Trap for a Weasel

"Weasels are curious by nature and are rather easily trapped in No. 0 or 1 steel leghold traps. Professional trappers in populated areas use an inverted wooden box 1 or 2 feet (30 or 60 cm) long, such as an apple box, with a 2-to 3-inch (5-to 8cm) round opening cut out in the lower part of both ends.  (See trap photos here: http://icwdm.org/handbook/carnivor/Weasels.asp).
​What to put in a weasel trap to attract a weasel-Dribble a trail of oats or other grain through the box. Mice will frequent it to eat the grain and weasels will investigate the scent of the mice. A trap should be set inside the box, directly under the hole at each end of the box. Keep the trap pan tight to prevent the mice from setting off the trap. Alternatively, make a hole in only one end of the box and suspend a fresh meat bait against the opposite end of the box. Set the trap directly under the bait.Trap sets in old brush piles, under outbuildings, under fences, and along stone walls are also suggested, since the weasel is likely to investigate any small covered area. Trap sets should be protected by objects such as boards or tree limbs to protect nontarget wildlife". (Weasel control and management. 2019)

If You Catch one Weasel There may be more 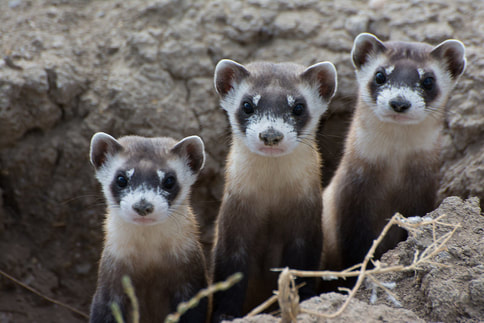 Female weasels have a 51 day gestation period and usually only give birth once a year but they can have from 6-10 baby weasels when they do. If you trap one weasel it is quite possible that there could be 10 more nearby so keep setting your traps. How long the weasels have resided in your area will determine how many you may catch.
More About Predator Protection
References: ​