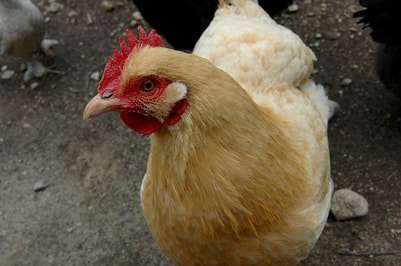 "The Plymouth Rock was developed in America in the middle of the 19th century and was first exhibited in Boston, Massachusetts as a breed in 1849. These first specimens seemed to “lose their identity” and the breed disappeared for two decades until it reappeared at another poultry show in Worchester, Massachusetts in 1869. These later birds are considered the progenitors of the Plymouth Rocks we know today. Several individuals claimed invention, using crosses of Spanish, White Cochin, Dominique, Buff Cochin, Black Java, and Brahma. The original Plymouth Rock chicken was of the Barred variety and other color varieties were developed later including: White, Buff, Silver Penciled, Partridge, Columbian, and Blue. The breed was accepted into the American Poultry Association’s Standard of Excellence in 1874". ----Livestock Conservancy https://livestockconservancy.org/index.php/heritage/internal/plymouthrock

How to Tell the Difference Between Buff Plymouth Rocks & Buff Orpington's

Buff Plymouth Rocks, Buff Minorcas, and Buff Orpington chickens are almost impossible to distinguish the difference when they are baby chicks but when they become adults you can see a definite feather pattern difference as the Buff Rock's feather's are light and dark gold giving them a marbled appearance whereas the Buff Orpington feathers are usually fluffier and calmer than Buff Plymouth Rocks or Minorcas and have a more solid gold feather appearance.
Buff Orpington
​Buff Plymouth Rock Hen. Vlad (the Impaler). (2018). Flickr. Retrieved 18 May 2018, from https://www.flickr.com/photos/29278394@N00/28267883291