What to Do If Your Rooster Turns Mean

Why roosters attack and how to tame them. I have had many encounters with roosters who have turned mean usually around the time they hit puberty and I discovered a way to discourage this behavior almost by accident. Here are three different ways I tamed mean roosters. Each rooster had his own type of meanness and each one stopped due to different methods. 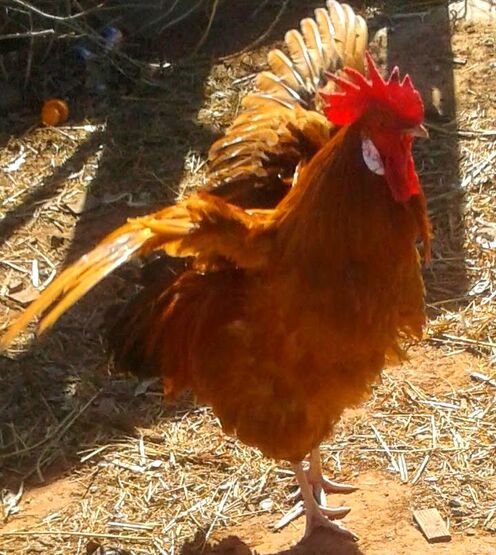 Mr. Blanche (rooster at CHOE)
To understand why roosters attack you need to understand that roosters are the epitome of the male ego. They run the roost, run the hens, break up fights among their hens, flirt, provide treats of found insects and tidbits to their ladies, and have a built in need to patrol and protect. They are possessive over their hens and their people, if they are pets or if they are the only rooster on the property. Roosters will attack and in some cases kill another rooster. Think about it for a second, if a man has a wife, or many wives, he is not just going to stand there while another man comes to steal his wife so the man confronts the other man. The rooster is the same way. If you are going to bring another rooster into the flock make sure that that rooster comes with his own hens (at least six to twelve). A rooster bringing more ladies to the flock is more readily accepted by the kingpin roosters who run the flocks. Roosters can bond with their owners male or female and become very protective of them especially if they do not have hens. This behavior will slow and most likely stop if you get him some hens and let him do what roosters have a natural instinct to do, hang out with and protect his ladies. If he doesn't have any ladies to protect you, your small pets, and stuffed animals, may become his next best substitute to protect and unfortunately, if he doesn't have a mate (hens) he will mate with your shoes, your puppy, stuffed toys, a balled up sock, cats, and anything else he can mount. A rooster needs hens-period. I discovered several ways to tame mean roosters. If you try them one way may not always work, you may have to try a combination. My main ways to tame mean roosters are:
Provide new fresh hens
Isolation cage if they try to intimidate or attack
Intimidating the bird by pushing back-Do not engage in battle with your rooster this will only make him act worse. Pushing him away with something and quickly grabbing him and isolating him while telling him "No bad boy" seems to work. Providing the rooster with plenty of hens calms him down as long as you stay away from his ladies until he learns to trust you. See some experiences I have had taming roosters below 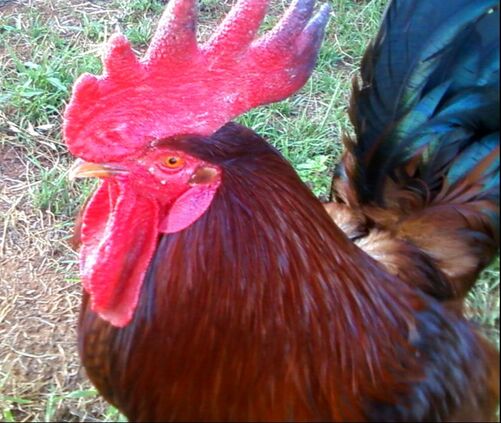 My Rhode Island Red Rooster named "Mr. Buttercup" aka "Punk"
My extremely tame, hand raised rooster named Buttercup was getting too old to stay in the house much anymore. He could see the hens out the window and I knew it was time to introduce him into the flock. Mr. Buttercup had been the runt of the chicks and he was weaker than the other birds, as he grew older he grew stronger but still I knew he hadn't the experience of free ranging on the property like my other roosters and hens. His first experience with another rooster ended badly. Mr. Buttercup had no fear of anything and his natural instinct to fight arose when he came face to face with another rooster, feathers around his neck flared out and the other rooster accepted the challenge, I realized that a fight was about to break out but I was about a block away from them on the property, I started running toward them and hollering "NOOOO" but to no avail. The boys fought for a few moments, I was able to grab Mr. Buttercup out of the fray and he got mad at me and tried to attack me for a second. That day change everything. Mr. Buttercup was determined to get a hen and had no intention of hanging around the outskirts of the flock like an outcast rooster waiting for a hen to stray. He became stronger, confronting roosters and taking their hens. I was proud of my boy for taking his place in the flock. I was sad because he really preferred hanging out with the hens but would still tolerate my attentions. When we were away from the flock he loved to snuggle and be petted but when we were around the girls he wanted to be the kingpin and did not want me near him. If I got too close to one of his ladies he would charge at me and tried to flog me by jumping into the air. Luckily for me, his spurs had fallen off in one of his scrimmages. I quickly learned to stay away from his hens when he was around. After, he reached maturity he must have realized I meant his hens no harm and calmed down. We had reached a mutual agreement, I wouldn't go near his hens when they were with him and he wouldn't chase me or flog me. He even allowed me to come within three feet of them but no closer. However, if I picked up a hen and she screeched, Mr. Buttercup would come charging at me while he was in the teenager puberty stage that charge would have ended in a brutal attack on me but as an adult he simply grew out of it and stopped doing it. 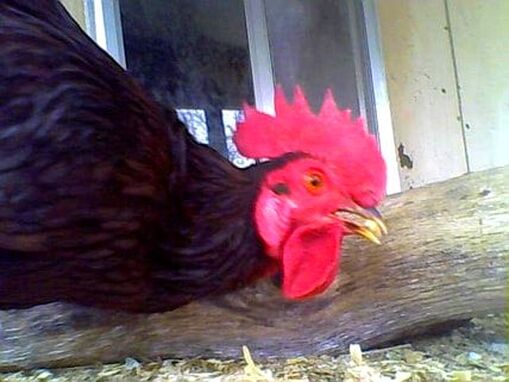 Rescued rooster Lil' Man Rhode Island Red Bantam Now The Weekly Crow Icon
Lil' Man was a Rhode Island Bantam who had been brutally abused by larger chickens in his former home, and was rescued by Chicken Heaven On Earth. He made a full recovery and was so sweet I never would have suspected that he could ever be mean. I didn't have any bantam hens yet and wouldn't dare put him in the flock with my standard size birds where he would be subjected to the same tortures he had went through. While I searched for birds of his size, I was having a hard time finding any, Lil' Man bonded with me. He followed me everywhere, I carried him through the flock to his pen every day and tried to put hens with him but he was simply too small to mount them. He became very protective of me. When a woman would approach me Lil' Man was docile and friendly but if a man approached me, Lil' Man went into a frenzy trying to attack the man. He would get so upset he would actually do a backflip. Everyone thought this was cute until he actually made contact and his razor sharp spurs drew blood. I decided it was time to do something. I grabbed a feather duster and brushed him back away from the man but Lil' Man was fired up and attacked the feather duster with a backflipping fury. This behavior became regular toward any male who approached me. It appeared as if he thought I was his adopted hen and he was trying to protect me. I decided that this behavior couldn't be tolerated. I put on some leather gloves and had a man approach me. Every time the male approached I told Lil' Man, "NO" very firmly, he looked at me and then got ready to attack, when I seen his hackles go up, I grabbed him from behind and placed him in a pet carrier. I left him in the pet carrier for an hour. I let him out again and had the male approach repeating the same procedure but leaving him in the pet carrier for a longer period of time each time before I would let him out. I repeated this for two days. On the third day when the male approached, Lil' Man simply pecked at the ground and allowed us to talk. I tried this with various men in my family until Lil' Man realized that he would end up in that pet carrier if he attacked and he never attacked again. This same method worked with two roosters rescued from a cockfighting ring. 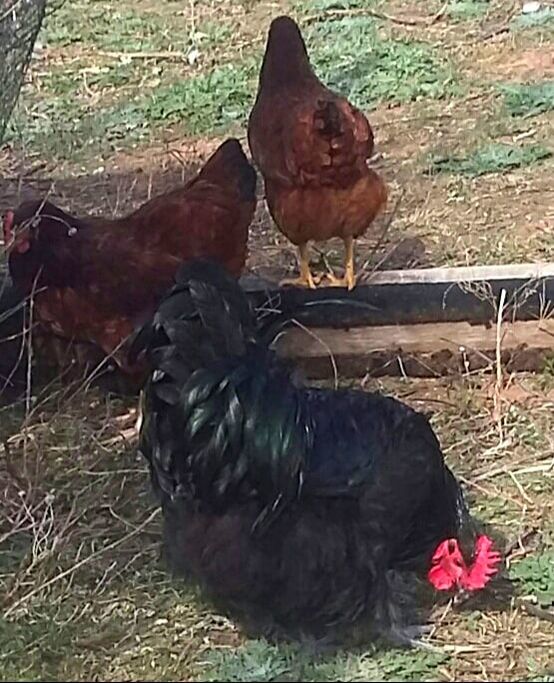 What Mr. Luke (Black Australorp rooster) does when he isn't being mean. Rooster flirting with some hens
Then there is Mr. Luke. Believe it or not, intimidating your mean rooster will work in most cases. I have had several extreme cases where a rooster insisted on intimidating me by trying to attack me every time I let him out to free range with the other chickens. He had problems with other roosters and just could not seem to fit in, even after several tries. So I had to choice but to set him up with his own coop and run. I gave him two hens until his hens I had ordered for him got old enough to be  with him. One of his hens jumped the fence and went back with her old rooster. At night, when I went to shut his cage, he was calling to the missing hen. The next morning, when I opened his pen he went into attack mode and continued to behave this way every time he seen me. He has huge spurs and I actually ran from him several times (big mistake). A few days later I was fed up with his attitude and picked up an old thin tree branch that was laying around. I used it as a buffer between him and I so I could get past him. That worked once and he walked away from me while I did my chores. A few hours later, he came after me again. I picked up the branch and instead of backing away I moved quickly towards him telling him firmly, "NO" I repeated this action every time he tried to come after me, I even pushed the branch against his chest, at which point, he stepped back and then went on his way. I repeated this action for two days. Every time he charged toward me I charged right back with the branch. On the third day I gave him four beautiful hens and he has not charged at me since. It has been more than a month. This same method worked with some rescued roosters who had been cockfighting birds.
More About Roosters