The greater Prairie Chicken also called the pinnated grouse, Tympanuchus cupido and boomer, has been pushed almost to extinction due to habitat loss, hunting, and the sneaky antics of the ring necked pheasant, though conservation methods are in progress to save them so far they have proved unsuccessful. The Prairie Chicken is a quite large bird in the grouse family. This unique bird is well known for it's mating ritual referred to as booming. Find out more below... 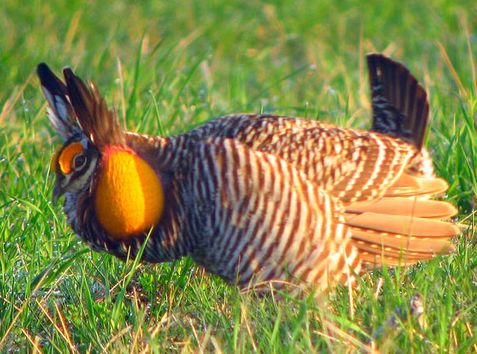 Male Prairie Chicken photo courtesy of GregTheBusker - Prairie Chicken, Puffed UpUploaded by Snowmanradio, CC BY 2.0, https://commons.wikimedia.org/w/index.php?curid=10312117
Kansas has two species of the prairie grouse. The greater prairie chicken also called Tympanuchus cupido and the lesser prairie chicken also called T. pallidicinctus. The third species the sharp tailed grouse also called T. phasianellus was almost pushed to extinction from over hunting during the drought in the 1930's. Conservation efforts to restore the sharp tails in the 1980' and 1990's proved unsuccessful (1). One Kansas study revealed that greater prairie chickens survival rates were 1.6-2.0 higher when it was not breeding season in comparison with survival rates during breeding season. The suggested reason for this is because predators would get their eggs during nesting and get the baby chicks while the mother was rearing them. Another interesting reason for their lack of survival is due to the fact that ring necked pheasants will lay their eggs in the prairie chickens nest. The pheasant eggs hatch sooner than the prairie chickens so the mother would leave the nest thinking her young had hatched and the prairie chicken eggs would die because the mother would no longer be there to incubate the eggs. 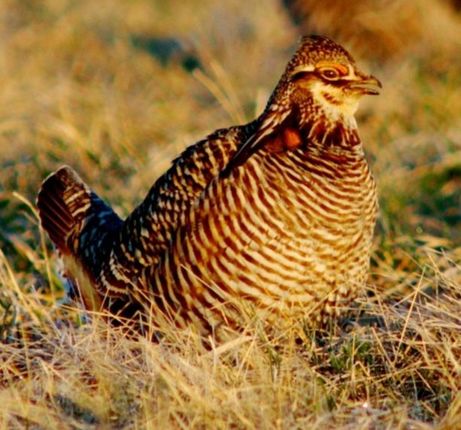 Female Prairie Chicken
Physical Description
The prairie chicken is very similar in appearance to the chickens we know today but with a few distinct differences:
Medium to large
Stocky
Round Wings
​Short tails (usually rounded and blue in color)
​
Adult males:
Orange yellow comb-like feathers over the eyes and dark long head feathers which can raise up or lay along the neck.
Circular orange unfeathered neck patch that can inflate
​
Adult females:
Have shorter head feathers
Do not have the yellow comb or orange neck patch.
As with many other bird species, the adult females have shorter head feathers and also lack the male's yellow comb and orange neck patch (2).

Canadian Species at Rick Act listed the Greater Prairie Chicken as extirpated in Alberta, Saskatchewan, Manitoba, and Ontario in May 2000.
Committee on the Status of Endangered Wildlife in Canada confirmed that the birds were becoming extinct in November 2009 as sightings of the beautiful birds became extremely rare.
Iowa and Missouri which once had a flourishing population of prairie chickens which was estimated to be in the hundreds of thousands has dropped to around 500 of the birds.
Kansas and Nebraska are in the process of repopulating the birds with hopes of increasing the number to 3000. 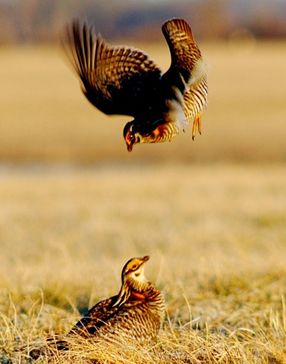 "Central Wisconsin is home to approximately 600 individuals, down from 55,000 when hunting was prohibited in 1954. Though this area was predominately spruce and tamarack marsh before European settlement, early pioneers drained the marshes and attempted to farm the poor soil. As the prairies to the south and west were lost to agriculture and development, and the southern half of Wisconsin was logged, the prairies spread northward into the abandoned farmland. Today, over 30,000 acres are managed by the Wisconsin Department of Natural Resources as greater prairie chicken habitat. Birdwatchers travel from around the world to visit Wisconsin in April for the Central Wisconsin Prairie Chicken Festival, started in 2006 by Golden Sands Resource Conservation & Development Council, Inc.
Threats
​"Greater prairie chickens are not threatened by severe winter weather. When the snow is thick they "dive" into the snow to keep warm. A greater threat to the prairie chickens comes in the form of spring rains. These sometimes drenching rains can wreak havoc on their chicks. Another major natural threat is drought. A drought can destroy food and make it difficult for the chicks.
Human interactions are by far the greatest threat. The conversion of native prairie to cropland is very detrimental to these birds. It was found in a radio telemetry study conducted by Kansas State University that "most prairie chicken hens avoided nesting or rearing their broods within a quarter-mile of power lines and within a third-mile of improved roads." (Kansas Department of Wildlife and Parks) It was also found that the prairie-chickens avoided communication towers and rural farms.
After population bottleneck, human management of populations can also produce a loss of genetic variation and genetic diversity in the species.

Sexual Behavior of The Prairie Chicken 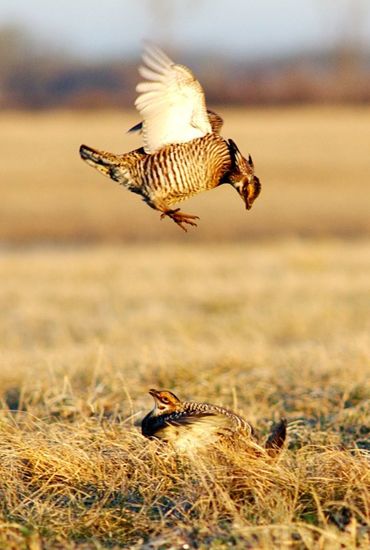 Sexual behavior
Tetrao cupido drawn by T. W. Wood for second edition of Darwin's The Descent of Man, 1874 Greater prairie chickens do not migrate. They are territorial birds and often defend their booming grounds. These booming grounds are the area in which they perform their displays in hopes of attracting females. Their displays consist of inflating air sacs located on the side of their neck and snapping their tails. These booming grounds usually have very short or no vegetation. The male prairie-chickens stay on this ground displaying for almost two months. The breeding season usually begins in the United States starting in Late March throughout April. During this time the males establish booming sites where they display for the females. The one or two most dominant males will do about 90% of the mating. Due to their now small populations and habitat fragmentation the greater prairie chickens often undergo inbreeding causing observable inbreeding depression: with fewer offspring and a decreased survival rate within these limited offspring further aiding their population decrease.
After mating has taken place, the females will move about one mile from the booming grounds and begin to build their nests. Hens lay between 5 and 17 eggs per clutch and the eggs take between 23 and 24 days to hatch. There are between five and 10 young per brood. (INRIN, 2005). The young are raised by the female and fledge in one to four weeks, are completely independent by the tenth to twelfth week, and reach sexual maturity by age one (Ammann, 1957)".
References:
1. Greater prairie chickens. Retrieved on Aug. 20, 2017 from http://ksoutdoors.com/Hunting/Upland-Birds/Greater-Prairie-Chicken
2. Greater Prairie Chicken. Retrieved on Aug. 20, 2017 from https://en.wikipedia.org/wiki/Greater_prairie_chicken