Eye worm prevention, causes, symptoms, treatments, and historical treatments used for eye worm in chickens. ​Eye worm is caused by contact with an infected host such as a chicken eating an infected earth worm, or a Darkling beetle, snails, slugs, or other infected host. It can also be caused by contact with infected dirty litter, wild birds who are infected and exposure to any infected animal feces, such as an infected dog, cat, turkey or other livestock. Proper sanitation can help prevent eye worm and other kinds of worm infestations. Eyeworms are Nematode parasites (a large round worm or thread worm) that attaches itself under the eyelid and behind the eye of the chicken. 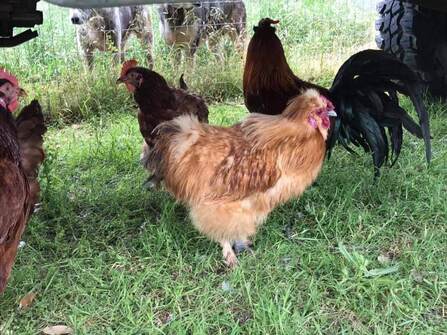 Eyeworm also called Oxyspirura mansoni is fairly easy to detect on chickens and turkeys. Left untreated eyeworm can cause your chickens to get very sick, can cause blindness, and death in severe cases.
What eyeworms look like:
White, ¼- to ½-inch long worms infecting the eye, beneath the nictitating membrane.
Location:
Under the nictitating membrane of the eye and in the naso-lachrymal duct. (Under the eye lid and behind the eye).
Symptoms of Eyeworm in chickens are: (R. D. Jacobs, J. A. Hogsette, and G.D . Butcher)
"The nictitating membrane, which is swollen and projects slightly beyond the eyelids at the corner of the eye, is kept in continual motion to and fro, as if to remove some foreign body. The eyelids become stuck together and a white cheesy matter, easily removed, gathers beneath them. Further symptoms appear which seem to be due to a complication with catarrh. The tissues surrounding the eye and the infra-ocular sinuses become highly inflamed, and are reddened and swollen. (See Frontispiece.) The e}^eball is \ike\y to be involved; the cornea becomes opaque, and later the entire eyeball is destro}r ed and the orbital cavity is filled with a yellow purulent material. When this stage is reached the worms are no longer to be found in the eye. The nostrils may also be affected and become obstructed in the catarrhal process, and finally fatal results may follow. The bird becomes somnolent, scarcely eats, declines in strength, becomes anemic, and dies in three or four weeks" (​ B. H. RANSOM, B. Sc , A. M., Scientific Assistant in Charge of the Zoological Laboratory, Bureau of Animal Industry).

How Chickens Get Eyeworm From Certain Insects

Chickens who are allowed to eat insects, are kept in dirty litter or coops without screens are at higher risk of contracting eyeworm.
Chickens can get eyeworm from Surinam Cockroach and other Insects:
​​"Eggs of Oxyspirura mansoni, Manson eyeworm, are deposited in the eye, reach the pharynx via the nasolacrimal duct, are swallowed, passed in the feces, and ingested by the Surinam cockroach, Pycnoscelus surinamensis. Larvae reach the infective stage in the cockroach. When infected intermediate hosts are eaten, liberated larvae migrate up the esophagus to the mouth and then through the nasolacrimal duct to the eye, where the cycle is completed. Other insect species may also serve as the intermediate host. Surinam cockroaches are attracted to warm humid places so it is important to make sure your coop is well ventilated and dry in warmer months. Keep your chicken yard clean and free of debris and piles of wood.

Chickens can get eyeworm from Cestodes (a parasitic flat worm) which infests Small Beatles that breed in contaminated litter:"
​"Cestodes require an intermediate host (eg, insects, crustaceans, earthworms, or snails). Floor layers, breeders, and broilers are infected with Raillietina cesticillus by ingestion of the intermediate host, small beetles that breed in contaminated litter....Litter beetles may also serve as intermediate hosts.​ Beetles are attracted to moisture so be sure to keep bedding dry at all times.

Chickens can get eyeworm from infected House flies:
Cage layers in unscreened houses may become infected with Choanotaenia infundibulum by eating its intermediate host, the house fly. It is important to keep your coop clean and dry at all times. Remove anything that attracts flies. Flies are attracted to rotting fruit, decaying feces, rotting material, and garbage when looking for a place to lay their eggs.
More than 3,000 of the microscopic tapeworm Davainea proglottina have been recovered from a single bird.

Vet RX is used to treat favus eyeworm in all types of poultry, (chickens, ducks, and game birds). It is easy to use and effectively treats for several other illnesses as well, such as respiratory disease, CRD, croup, and scaly leg mites. It's a good idea to keep Vet Rx in your poultry first aid kit. Piperazine is effective on most other types (See below).

Most cases of Favus eyeworm can be treated with Vet Rx successfully but is a very slow process and it does not get rid of other types of eyeworm. However, I met a woman who told me a sprinkle of Foodgrade DE (Diametaceous Earth) inside the eyelid every other day for 1 week will successfully kill the eyeworm. I was slightly skeptical and was quite worried the chicken may go blind but her condition was getting worse and I knew I had to do something, so in desperation, I decided to try it. I put a sprinkle just inside the upper lid and a sprinkle inside the lower lid. I repeated it two days later and by the fifth day there was no sign of eyeworm and the healing process had already started. My little hen named Pearly made a complete recovery. Piperazine is a common treatment for other types of eyeworm (see more below the video).

Featured Video: How to Treat Wormeye In Chickens

Chickens who have access to other animal feces which have worms, eat earthworms, darkling beetles, litter beetles, snails, slugs, houseflies or other insects that are carrying the parasite Helminthiasis which can cause eye worm, roundworm and other worms in your chickens have an increased chance of contracting eyeworm. Wild birds carry diseases and worms which your chickens can catch. Keeping your chickens in an enclosed area where they do not have access to animal feces and where wild birds do not have access to your chicken's area will reduce the chances of your chickens getting worms and eye worms. Vet Rx is commonly used to treat eye worm. From my own experience with it on several occasions treating people's birds, I have found that Vet Rx takes quite awhile to get rid of eye worm especially if the chicken has had it for awhile. Turns out there are different types of eyeworm and Vet Rx works only on Favus eyeworm. The first time I had a chicken with eyeworm,  I used Vet Rx but the bird had it too long or it was a different type and the eyeworm persisted. In desperation I sprinkled a little bit of Food grade DE in the corner of her eye and it worked. I repeated it a few days later and no more eyeworm. It did dry out her eye a bit tho but it returned to normal within a day. I later found out that Piperazine compounds are relatively nontoxic and have been widely used against ascariasis, treatment for eyeworm and other worms used in the commercial industry. --Motherhen. Note: This is NOT the recommended treatment for eyeworm by veterinarians.

​PIPERAZINE TREATMENT for eyeworm-DOSAGES FOR CHICKENS

According to Merck's Veterinary manual Piperazine compound is the recommended treatment for eyeworm and other types of worms in chickens, "doses should be calculated based on mg of active piperazine/bird. Piperazine should be completely consumed by birds within a few hours because only relatively high concentrations of the drug eliminate worms. It may be given to chickens as a single dose, 50 mg/bird if the bird is less than 6 wk old, 100 mg/bird  if bird is older than 6 wk old, in the feed at 0.2%–0.4% or in the drinking water at 0.1%–0.2%; it may be administered to turkeys at 100 mg/bird less than 12 wk old or 200 mg/bird more than 12 wk old. Some practitioners recommend the addition of molasses to unmedicated water after piperazine administration, so as to induce an osmotic flushing, theoretically removing any of the remaining worms from the intestinal tract. For severe cases, treatment can be repeated after 14 days. These medications must be withdrawn 14 days before slaughter. Piperazine is not approved in the USA for birds producing eggs for human consumption". Overview of Helminthiasis in Poultry - Poultry - Veterinary Manual. (2018). Veterinary Manual. Retrieved 14 April 2018, from https://www.merckvetmanual.com/poultry/helminthiasis/overview-of-helminthiasis-in-poultry#v3341937
See more about how historical farmers treated chickens for eyeworm below.
Note: I may receive a small commission from eligible Amazon purchases advertised.
​​
7 Ways to Prevent Worm Infestations

Wondering how farmers treated Manson's eyeworm in the early 1900's?
​"The treatment consists in the removal of the worms, combined with the treatment of the associated catarrh (a build up of mucus in the airway). "Certain general precautions which are likely to prevent the spread of this as well as of other parasitic diseases should, however, be taken. Affected fowls should be isolated. The chicken houses should be kept clean and disinfected frequently by the use of boiling water and whitewash, with which carbolic acid, creolin, or other disinfectant has been mixed. The yards likewise should be kept clean and free from excessive moisture. Chickens should not bo allowed to drink from stagnant pools, but pure drinking water should be furnished in vessels which can be frequently cleaned".
Note: When reading this document do not assume content reflects current scientific knowledge, policies, or practices.
Historical archived document: Manson's Eyeworm of Chickens by B. H. RANSOM, B. Sc , A. M., Scientific Assistant in Charge of the Zoological Laboratory, Bureau of Animal Industry published by the Library,  U.S. Department of Agriculture in 1904.
More About Chicken Health
References:
​1. R. D. Jacobs, a. (2018). PS18/PS012: Nematode Parasites of Poultry (and where to find them) . Edis.ifas.ufl.edu. Retrieved 14 April 2018, from http://edis.ifas.ufl.edu/ps012
2. ​Overview of Helminthiasis in Poultry - Poultry - Veterinary Manual. (2018). Veterinary Manual. Retrieved 14 April 2018, from https://www.merckvetmanual.com/poultry/helminthiasis/overview-of-helminthiasis-in-poultry