CHOE Studies prove chickens do have cognitive abilities! Includes test results, expert opinions, and our featured video showing how smart chickens really are and how easy it is to train them. Watch the video below: Chick Training. 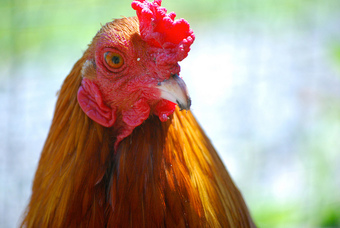 Bird's tested in CHOE Study Chickens have cognitive abilitiesNo animals were harmed in any way during testing
No drugs or chemical alterations were performed on the chickens
Chickens trained easily using positive reinforcement
Chickens were trained using positive reinforcement (praise and food for positive behavior) and the word "no" for negative behavior.
The chickens in these tests were observed 24 hours a day. Studies indicate that chickens have exhibited advanced Cognitive Capabilities. See results below.

Results of Testing:
Observations of Chicken Cognitive Abilities at CHOE:
Studies at Chicken Heaven On Earth have indicated that chickens do have cognitive abilities. Out of a group of 30 hens, 12 roosters, and 10 baby chicks which were observed over a five year period-all of them demonstrated advanced cognitive abilities equivalent to those of small children with some adult characteristics.

Jesus said to him, “I am the way, and the truth, and the life. No one comes to the Father except through me. John 14:6

The Hidden Lives of Chickens

What others are viewing