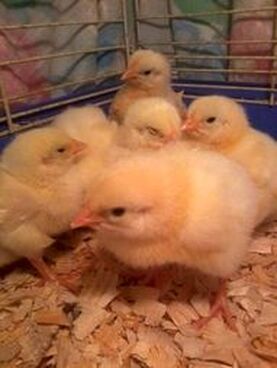 Broiler hen chicks we call them the Fat Gurlz rescued by CHOE 2014
Each one has a story. Some have a happy endings and some have sad ones. All of them deserving attention and care. We love every chicken we rescue here at Chicken Heaven On Earth Rescue Sanctuary. Each and every one of them have distinct and different personalities which can steal your heart at the very sight of them. Most of the rescued chickens we get at Chicken Heaven On Earth are roosters and hens who were previously pet chickens or backyard chickens, many were house pet chickens so they need lots of attention every single day. Though I try to integrate them into the flock and encourage them to learn natural chicken behaviors, many still crave human interaction, so most days after chores, I spend sitting on the ground, talking to and petting chickens. To me, they are like children who need care, encouragement, and love every single day. We pray for happy endings for all of our rescues and private stock chickens here at CHOE.
​​Each week we feature a new true rescued chicken story. Scroll down to see more rescues and pictures and stories of recent rescued chickens. We are now featuring chickens rescued by other people and sanctuaries as well.
​If you would like to share your chickens story please email your story and photos to me: chickenheavenonearth@gmail.com
​True stories and videos of rescued chickens! New updates on Meet Mr. Parker rescued rooster, rescued hen Lady Silkie and Lady Frizzle. See Penelope the hen rescued from bizarre religious rituals, Lil' Man-The Weekly Crow Icon's rescue, battery hen rescues, rescued rooster's, rescued hens, rescued baby chicks, rescued ducks, and more!

Meet Rocky the Rooster-New Rescue at Chicken Heaven On Earth 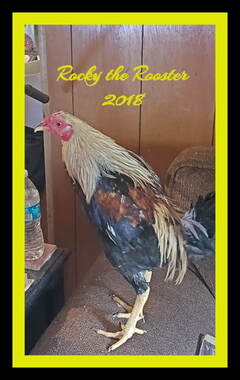 Rocky the Rooster was found abandoned and wandering around, obviously looking for food and a safe place to rest his weary little head. His former owners discovered him and turned this little gamecock into a house pet. See what happened next:
​See Rocky's Story
<
> 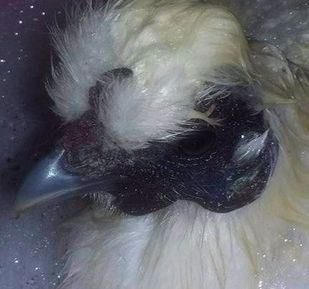 Lady Silkie's owner's couldn't figure out what was wrong with her, she sat like a human, fell over when she walked and they were sure she wouldn't live. They brought her to us saying, "We figure if anyone can save her you can, please keep her we don't have any small chickens and cannot give her the care she needs". We helped her, we're keeping her, and we just love her! See  Lady Silkies Miraculous recovery 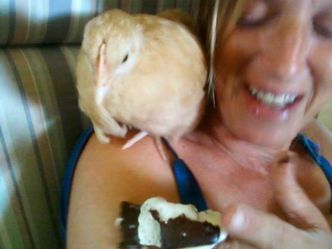 Goldie: Sole survivor of Cat Attack sharing a ice cream sandwich with me.
There are new updates and pics of Goldie-you may remember her, she is the first Buff hen we ever rescued, Goldie watched from her hiding place as a cat killed her sister's and brother's and she survived without injury but her owners were worried and brought her to us. 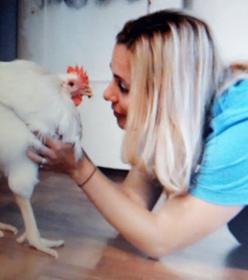 Rescued hen named Penelope and her loving owner who saved her from certain abuse and death.
Penelope was rescued and overcame huge obstacles, it did not seem like she would survive the horror she had endured but with the love and attention she received, Penelope the rescued hen not only survived, she thrived. Watch this inspiring video of Penelope the chicken rescued from a horrifying religious ritual held annually in New York and other places by Orthodox Jews. Be sure to sign the petition to stop this horror.

This is Bonnie-Sweetest Little Rescued Hen in the World 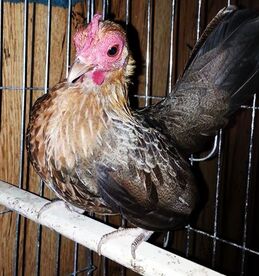 Bonnie-Tiny Old English Bantam Hen rescued by Chicken Heaven On Earth 2014
This is Bonnie, a tiny little hen less than 3 1/2 inches tall which was rescued by Chicken Heaven On Earth. Her former owners had disease running through their flock and many of their chickens were dying. He gave this little hen to Rev. Penny Dean in the hopes that we could save her life, and save her we did. Bonnie has made a full recovery but due to the nature of her former illnesses must be kept separate from the rest of my flock so now she has become my little housepet chicken.

Foghorn the Rooster Lost His Feet to Frostbite & Gets New Feet!

Photo used under creative commons from http://calgary.ctvnews.ca/3d-technology-gives-footless-fowl-leg-up-1.2463684
Most chickens do not get this lucky! Poor Foghorn the rooster lost his feet to frostbite and gets new feet, thanks to modern technology! See Foghorn's New Feet 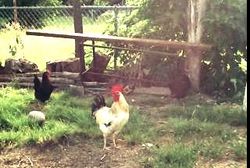 Peepers at his new home with his pretty hens.
Peepers is a very special little rooster, not only was he actually born at Chicken Heaven On Earth with a rescued rooster and a rescued hen as his parents, but he was also adopted and now has a happy home with several beautiful hens to keep him company.
CHOE found a happy home for Peeper's.

In the early days when Chicken Heaven On Earth was in it's early stages of development I had a baby chick who I kept in my home with me. Fox 4 was an amazing little baby chick born with the Fox 4 news number four on his head, Bound for a bright future when something terrible happened..read about his life here: Fox 4's Legacy Sister-ForRest
Fox 4 the baby chick also had a beautiful, funny sister read about here here:

Mr. Parker eating from my hand. 2018 at Chicken Heaven On Earth
Mr. Parker is a beautiful rooster, though we do not know what breed he is for sure, this handsome guy was brought to our sanctuary and his awesome docile and friendly personality has endeared him to me and the flock.
​Meet Mr. Parker
Penelope the hen, a young broiler chick was crated and about to be offered up to be a sacrifice in a religious ritual called Kaporos, when one brave soul grabbed her and ran with her. 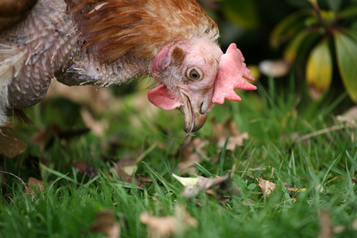 Meet Lady Frizzle-Survivor of Abuse and a Skunk Attack! 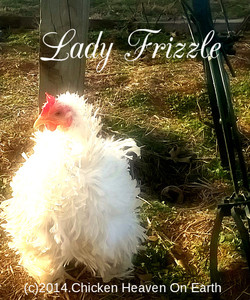 Lady Frizzle (rescued by Chicken Heaven On Earth) was a victim of pecking from larger birds and attacked by a skunk but this little girl beat the odds and made a 100% recovery! Video and pics. Scroll down to see more rescued chickens.... 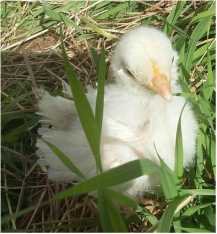 Lost My Chicken (A Happy Story)

Anyone who has had a chicken and suddenly couldn't find it can truly relate to this lost chicken story. What started out to be every pet chicken owner's nightmare, ended up with a happy but surprising ending. Go to Lost My Chicken 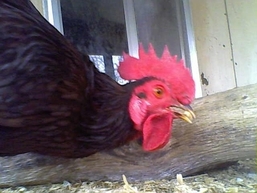 Lil' Man (Rhode Island Red Bantam)-All Star at Chicken Heaven On Earth
Severely abused and neglected bantam rooster makes a dramatic recovery after he was rescued by CHOE owner Rev. Penny Dean In Loving memory of Lil' Man
After his dramatic recovery..he became the Mascot for The Weekly Crow and lived many happy years with lots of hens free ranging at Chicken Heaven On Earth SAnctuary.
In Loving memory of Lil' Man
Daisy, Donny Jo, and Daffy-Rescued ducklings
Three little duckling's become unwanted Easter pets after the holiday is over. Daisy, Donny Jo, & Daffy 3 Ducklings
Rescued Ducklings
The Doughboy's fight for life & WIN!
Five little chicks found drowning in bread dough-CHOE fighting to save them-and they all survived! With video and pics.
The Doughboys fight for life & win!
Injured Chickens brought to us and made a full recovery 2013-2015Dexter
Sweet Rhode Island Red rooster named Dexter who had to leave his home because city ordinances would not allow him to stay. His former owner said he had heart problems and faints when he gets scared.The Fabulous Four
​All four roosters have been adopted 2014
Frosty
Barred rock hen rescued with her sister Missy are now veteran hens who rule the roost at Chicken Heaven On Earth.More rescues
2 turkey chicks
1 Pocket Gopher named Bubbasita-was injured had only one eye, made a full recovery and was released on CHOE property. He still pops out of the ground hole for treats!
3 Dogs
3 Rabbits
If you are interested in adopting or sponsoring one of our rescued chickens please send us a message or email us. chickenheavenonearth@gmail.com

Rescued by Chicken Heaven on Earth
Fox 4
Fox 4-an amazing little baby chick born with the Fox 4 news four on his head, bound for a bright future when something terrible happened..read about his life here: Fox 4's Legacy Sister-ForRest
Fox 4 the baby chick also had a beautiful, funny sister read about here here: Buttercup (Rhode Island Red Rooster) can be seen on Youtube. The Fabulous Four (Rooster's)

Lucky the rooster, unwanted Easter pet was adopted by Tony Johnson 2014
Also rehomed in 2014 Re-homed in 2015
41 roosters and 3 hens found forever homes in 2015
Re-homed in 2016
61 roosters, 14 spent hens, 1 dog
2018
One donkey-Shrek the Donkey has been adopted. August 2018 and has a new home with more acres to roam and protect.
14 Rescued Spent hens-up re-homed-These hens older than 2 years old were brought here by their owners who no longer wanted them because their egg production was no longer up to par.
10 rescued roosters
Re-homed 14 abandoned cats and kittens
2019
Rescued 40 roosters and 12 hens
​Re-homed 232 hens, roosters, and  12 guinea's
35 cats and kittens
​1 dog

"During the seventh year, let the land lie unplowed and unused. Then the poor among your people may get food from it, and the wild animals may eat what they leave. Do the same with your vineyard and your olive grove." Exodus 23:11
About Corona Virus Covid 19 and Chickens. Studies show you cannot get Covid 19 from chickens or other livestock. The Covid 19 strain found in poultry and livestock is NOT the same strain that is currently spreading across the world in humans. Keep your chickens coops and all supplies clean and sanitized to protect your chickens.
Can't find what you are looking for on our site? Try Google Search