What is avian pox?

Avian pox is a mild to severe, slow developing disease which causes wart like lesions on featherless areas of birds which is transmitted by mosquitoes who have fed on infected birds or on pox lesions of infected birds. Vaccinating birds for fowl pox is an effective way to prevent this illness. Most birds will recover from Avian Pox unless they get a secondary bacterial infection which is unnoticed or left untreated or if they have lesions which obstruct breathing or eating. 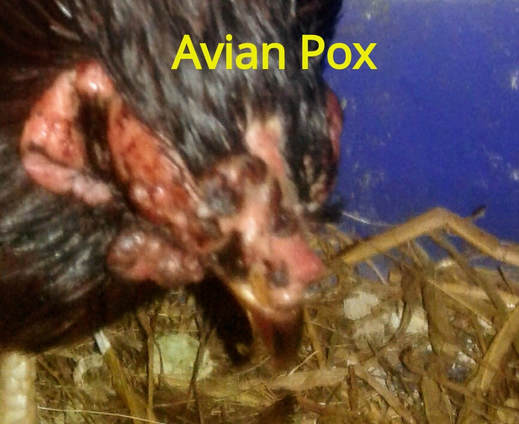 Image of Avian Pox. CHOE. 2018
Signs of avian pox are wart-like nodules on one or more of the featherless areas of a bird, often causing the bird to appear weak and emaciated if the lesions interfere with feeding. If breathing and feeding is not impaired, the lesions regress and the bird commonly recovers.
Secondary Bacterial Infections: Mortality can result from secondary bacterial infections that are common with this disease.
Wet Pox: An internal form of avian pox, called wet pox, appears as moist lesions on mucous membranes of the mouth, upper digestive and respiratory tracts, and most likely has greater morbidity and mortality in wild birds. Wet pox has been reported in house finches, ruffed grouse, and mourning doves (Utah Division of Wildlife Resources. 2018).
Avian pox lesions (wart-like growths) occur on:

How to prevent Your Chickens From Getting fowl pox

The best way to protect your chickens from fowl pox are: Vaccinating against fowl pox is an important part of health management for backyard chicken flock owners.
"Pox is a relatively slow spreading viral infection of chickens characterized by scab-like lesions on the skin of the unfeathered body parts and/or diphtheritic (wet) membranes lining the mouth or air passages. It has been present in chickens since earliest times and is found throughout the world. Infection with the fowl pox virus will cause the chickens to have poor growth, poor feed conversion and a precipitous fall in egg production. Mortality will seldom be marked if the lesions are limited to the skin. However, death may occur if the oral cavity or air passages become involved."
Reference:.http://edis.ifas.ufl.edu/vm021​. Mosquito dunks placed in pools, ponds, and other standing water can be used to reduce the amount of mosquito's near your chickens. (Do not use them in water your chickens will drink) You can also cover your coops and runs with poultry netting or small deer block netting to prevent wild birds from getting near your flock and mosquito netting.
Three most common strains of Avian Pox are: All three strains may  vary in their virulence and have the ability to infect other bird species. However, many of the strains are group specific.
Approximately sixty species of birds from 20 families have been diagnosed with avian pox. The strain seen in wild turkeys is the fowl pox virus"

Fowl pox can spread quickly through your flock. Find out more about fowl pox here:

How to Immunize Your Flock Against Fowl Pox

Watch a detailed video that shows how to vaccinate your chickens (includes everything from preparing the vaccine to injecting your birds with it) from fowl pox here: 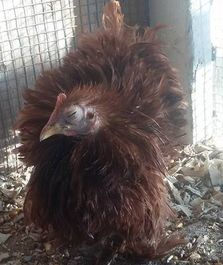 Chicken with Coccidiosis. (c). 2017. Chicken Heaven On Earth
The most obvious sign that chickens have the Coccidiosis parasite is blood in their feces (poop). If you suspect your chickens may have it you need to read this important information about how to prevent it, how to tell if your birds have it and how to get rid of it. Go to Coccidiosis Symptoms and Treatment

When you ask, you do not receive, because you ask with wrong motives, that you may spend what you get on your pleasures. James 4:3
References:
​Utah Division of Wildlife Resources. (2018). Wildlife.utah.gov. Retrieved 1 November 2018, from https://wildlife.utah.gov/diseases/avian_pox.php