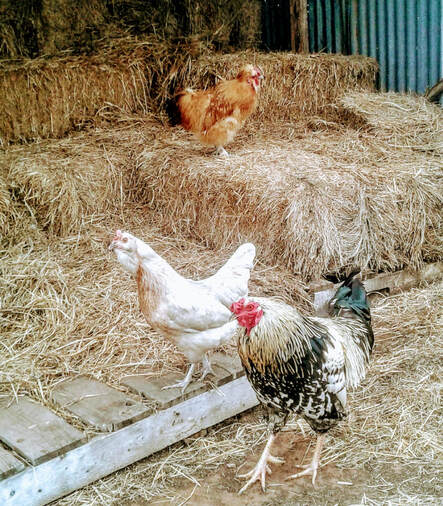 How to Introduce a New Rooster. Photo of Mr. Parker, Willie and Sprinkles. CHOE.
As many of you know, I rescue chickens and most of the rescues turn out to be roosters. In the early days, I built separate pens for them but after building 20 of them and observing their behaviors I quickly realized they needed to be out free ranging with hens not trapped alone in a pen where they developed stress, acted depressed, and mated with anything inside their pen including food and water containers, toys, whatever they could mount. I decided to cut them all loose into my flock after I bought 50 hens. What I found out was that there were not enough hens and the roosters were constantly fighting. Fortunately, I was able to grab each of them and put them back in their pens before any were seriously injured. Then I found a way to bring a new rooster in without all the scrapping. When a new rooster arrives, I buy 10 young fresh hens and put them in a pen with the new rooster to bond with him and in plain view of the rest of the flock so all of my other roosters and hens can see them and meet the new rooster and his hens safely. I keep them contained in the viewing pen for a few weeks, giving the old roosters a chance to confront him but not being able to actually reach each other. Before I put the new rooster in the main coop with his new hens I give all the chickens a bath or a parasite treatment so they all smell the same. Then I put them in the coop at night with the rest of the flock. When I let the flock out in the morning with the new rooster and his hens out I stay close by and watch closely. I have discovered that the old roosters may still confront him but only momentarily as they are distracted by the new hens and have already met him. The transition was so much easier than simply putting a new rooster in with a flock that already has a rooster. An old rooster does not want to share his hens with a new one and thinks nothing of fighting to the death to protect his ladies from the intruder but when a new rooster brings his own ladies the old boys are much more receptive and less aggressive. There may be some initial scraps but once dominance is established the weaker rooster will usually back down and things will settle down. NEVER leave a new rooster unattended until you are completely sure that his position in the flock is secure.

Introducing More Than One Rooster can become Dangerous for the weaker rooster.
If you are planning on adding more than one rooster to your flock you need to be very careful, as roosters will fight to the death. You should have 12-14 hens per rooster and plenty of space for them to select their hens and roam in their own area. If you are introducing a new rooster to an established flock which already has a rooster there will be a problem as the old rooster has already claimed the flock. When introducing a new rooster you should keep him and at least six new hens in a separate coop and pen area. The amount of property you have available for the chickens to roam in can also make a difference in how the roosters will react. For example, if you have five to ten acres you can generally have one rooster per acre. They will still fight from time to time if one of the roosters decides to go into another rooster's territory or steal one of the other rooster's hens.If you have enough hens and your bird's are free range and not overcrowded there will be much less violent scrapping between roosters.
Some Rooster's are more aggressive than others
Idealistically, It is best to keep each rooster in separate pens with their own hens especially more aggressive roosters. However, if this is not possible, you just need to make sure there are enough hens to go around and make sure each new rooster arrives with his own hens.
Young Rooster's Who Grow Up Together
If you want to add two or more roosters it is best to raise them from chicks, you will notice that they will start sparring with each other at two months of age. When they grow spurs the sparring will become more aggressive. If there is a shortage of hens they will kill each other.
Sometimes, they will develop a sort of relationship with the dominant rooster leading the bulk of the hens and the weaker or younger rooster will skirt around on the outskirts of the flock waiting for one of the hens to stray.
If he (the weaker or less dominant rooster gets caught mating with one of the dominant rooster's hens, (and he will) the dominant rooster will usually attack and quite possibly kill the weaker rooster.
The easiest way to prevent this from occurring is to separate them into different penned off area's with their own hens, and hen house and be sure their pen is covered so they cannot fly out and get into other rooster's pens.

Can you put Bantams & Standard Size Roosters together in the same flock?

It is not advisable to put bantam roosters in the same flock as standard size roosters as the larger rooster will dominate and possibly kill the bantam rooster. Most bantam roosters will back down from a much larger rooster but some will not. I have some Cochin roosters who migrated from my bantam side of the property to the standard size side of the property on their own.They skirted the edges and stayed in view but out of reach of the larger roosters. Eventually, they snuck into the big hen house (a 3 bedroom trailer house converted into a chicken coop) and were accepted into the flock. However, Mr. Snowie a dominant little white cochin rooster didn't do as well. My attempts to integrate him into the big house flock failed miserably. I tried bringing in extra hens and pen introductions but nothing worked. He is an aggressive little rooster and will not back down no matter how large or aggressive the other rooster is and several times I have found him battered and beat down but still not giving up. Now Mr. Snowie has his own pen and his own hens. Sometimes you just cannot put them together no matter what you do. It depend's alot on the rooster's personality. I have a tiny rooster named Mr. Sweet Pea a gold partridge Dutch Bantam who did well in the big house standard size chicken flock for a little while because he could fly to a high spot or a tree to get away from aggressive roosters but the day came when Mr. Sweet Pea decided enough was a enough as he had found a favorite hen who belonged to the biggest Production Rhode Island Red rooster (named Mr. Precious)on the property and Mr. Sweet Pea began to court her. Mr. Precious went after Mr. Sweet Pea. Luckily Sweet Pea was tiny enough to run circles around the lumbering giant and escape any real harm but he did get a pretty good gash on his comb from Mr. Precious. So now, Mr. Sweet Pea has his own coop and ladies. It's just a matter of watching how your birds interact with one another.
More About Roosters