Rumpless Araucana chickens are the original Easter Egger chicken. A beautiful ornamental chicken breed which originated in Chili. These unique chickens have sweet docile personalities, and come in a huge variety of colors. 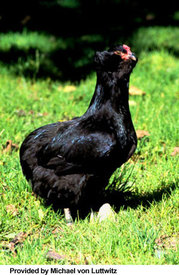 It has been speculated by creditable breeders that the Rumpless Araucauna breed is a mongrel that was developed by cross breeding a Collonca and Queteros because the original breed carried a gene that gave them tufted ears and a tufted rump. "The ear whiskers that are present on the breed are tufts of feathers that grow from the ear lobe region on the side of the bird's head. These feather tufts will sometimes grow rearward and touch each other to form what looks like a complete ring around the bird's head. More commonly, the tufts simply grow straight out from the bird's head and resemble miniature feather dusters stuck in the birds ears." (Hawkins, 1995-2004). These birds were aptly named "Easter eggers" due to their brightly colored blue and green eggs.
Rumpless Aracauna Origin: Chile, entered North America in 1921
Rumpless Aracauna are a Crossbreed between Collonca and Queteros.
Feather Color: Black, Grey or Silver, Gold,white; lavender; blue; black-red; silver duckwing; golden duckwing; blue-red; pyle; spangled; cuckoo
Egg Color-Blue or green/lays approx. 180 eggs per year
Photo: Michael von Luttwitz, Max-Friesenegger-Str. 22, D-86899 Landsberg, Germany