Splayed legs or Spraddle legs in baby chicks is caused by vitamin deficiencies, a genetic defect or incorrect mental processing. It is first noticed when the chicks legs spread further apart than they should and usually the chick cannot walk at all. This simple treatment can fix splayed legs in most baby chicks.
You can make a sling from a sock with holes for the chicks legs and hang the chick sock from something that will prevent the chick from putting weight on it's legs. Give the chick a vitamin supplement for baby chicks and use leg hobbles made from a pony tail holder with a small piece of straw cut to a length that will allow the legs to hold into a natural position. Leg hobbles have been used successfully to treat splayed legs (spraddle legs/ straddle legs) in chickens, however there are dangers associated with leg hobbling your chicken too. Baby chicks are most likely to develop splayed legs more so than older birds. If your chicks legs are spread out it may be necessary to hobble the chick until it's legs get stronger. It is important to treat splayed legs right away.  Splayed legs may look like a birth defect but can be corrected. Be sure to watch our featured video: The Garden Hen-Splayed Legs Repair. Also see warnings below about splayed legs in adult birds.

How to Hobble Your Baby Chick-Correction for Splayed Legs 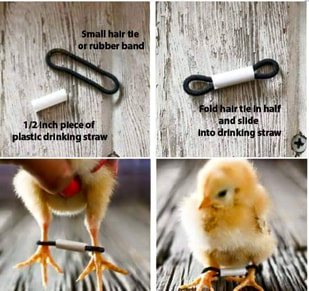 Easily fix splayed legs with a hair band and a cut piece of straw. Photo courtesy of Mini Acres Poultry on Facebook. https://www.facebook.com/MiniAcresPoultry/
Hobbling (Hobble braces) can help baby chicks from twisting their hip and legs out sideways because the hobble braces will keep the chicks legs from spreading too far apart. Hobbles should be comfortable, not to tight and wrapped around each leg and then connected through the gap between their legs. Leg hobbles should be put on within 1-3 days after hatching for best results.
How to make a Hobble from a rubber band or hair band (pony tail holder)
Use a small hair tie or rubberband
Cut a 1/2" piece of plastic drinking straw
Fold hair tie in half
Slide into drinking straw leaving loops on both sides
Put two fingers through the loop and grasp the baby chicks foot and pull it gently through the loop
Do this for both feet-See Photo.  The straw reinforces the center section of the band and keeps the baby chicks legs apart. (Mini Acres Poultry). You can also add a second hobble above the hocks for additional support after the chick is 4 days old.
How Baby Chicks Act When They Are First Hobbled
Wobbly at first
May lose their balance
Uses wings for support
Chick should be able to walk in a normal standing position after they get used to it.
Placement of Baby Chick Hobbles
Place the hobbles below the baby chicks hock.

Baby chicks grow fast so you will need to check the hobbles several times a day to make sure they are in the right position and not too tight or too loose. If hobbles are too tight they can cut off the blood circulation in the birds legs and even cut into the muscle. If hobbles are too lose they can slip off. Once your baby chick is hobbled it is important to watch them closely and to only provide water in a very shallow dish as the chick can easily lose their balance, fall over, and drown in their water. Your chick will not be able to scratch themselves and can get very uncomfortable so it is important that you scratch for them in places like the neck and back. If you do not help scratch them they can develop a itchy, swollen welt due to a lack of normal skin stimulation (Poultry Podiatry, 2016).

Using Hobbles for Chickens with a Rotated Foot

When a baby chicks foot slips and rotates in an opposite direction it is important to hobble them right away as the deformity will grow worse over time and eventually cripple the bird permanently when their bones harden. Many times it is only one foot that is rotated and the other seems normal, if untreated, the normal leg will become deformed from trying to compensate for the rotated one.

Hobbles Can Be Used On Birds With Slipped Achilles Tendon

A slipped achilles tendon can happen when baby chicks are crowded in the brooder while learning to walk. This is often caused from nutritional deficiencies but the bird could also be suffering from Perosis (Poultry Pedia).
Symptoms & Treatments for Slipped Tendon

If your baby chick is walking wrong and you allow it to continue doing so, it's brain will think that is the correct way for it to walk. Walking the wrong way while bones are trying to grow can permanently cripple the bird. By hobbling the chick you are putting it's legs and feet in the correct position. Baby chicks grow quickly and within a few days the hobbled chicks brain will adjust to the new way of walking and then the hobbles can be removed and the chick will walk normally.
"When a chick is first figuring out how to move & walk, if normal movement efforts are unsuccessful or painful, the chick will experiment with alternate ways of moving. If it finds movements that are temporarily less painful or more effective, the chick will program its brain to move in the alternate ways, which quickly become habits which then cause muscles, ligaments and bones to become deformed by the unnatural positioning & pressures.   ​If the Chick manages to wriggle out of the Hobbles use a single vertical wrap of sports tape (or masking tape or sticky section of band-aids) around the section between the two legs to more firmly tape the center section together.
What to Do If Chick Keeps Standing With Hocks too Close Together (for chicks 4 days old or older)

What to Make Hobbles From

Hobbles can be made from a variety of materials:
White cloth-type sports tape is probably the most ideal, but you can use Band-Aids, Scotch tape, masking tape that has strong stickiness, etc. Be sure to see Special Note on Removing Tape from Legs.
For Sensitive or Feathered Chick Legs
Put a little piece of paper towel (to cover the tape's stickiness) on just the section of the tape that wraps around the chick's legs. Yarn might be another good material to try--It helps minimize catching on fluff. Watch out for hobbles slipping too much
You can also use tiny plastic zip ties, leaving them a little bit loose for growth. You can tie the zip ties together with string & adjust length over time. This method may particularly be helpful for feather-legged birds.
You can make adjustable hobbles from Velcro. Make sure only soft side of material touches legs.
If you use a small elastic or hair-band in figure-8 around legs with tape wrapped around section between legs, there is greater chance of the hobbles slipping up on the legs, plus the band might stretch too much to be helpful enough.
Use extra sports tape wrapped vertically, pipe cleaners, thin piece of taped-on cardboard, etc" (Poultry Podiatry).

​If you have an adult chicken and it has had a twisted leg for a long time, do not try to hobble the bird as the adult bird's bones have already finished developing and their bones have already hardened. Hobbling an adult bird will only cause them pain, throw them off balance, and is not going to make any significant improvement in the twisted leg.
More About Leg Problems in Chickens
Reference:
1. Poultry Podiatry. Retrieved Mar. 20, 2016 from ​https://sites.google.com/a/poultrypedia.com/poultrypedia/poultry-podiatry
2. The Garden Hen-Splayed legs repair. (2018). YouTube. Retrieved 6 February 2018, from https://www.youtube.com/watch?v=CSPbqubJlU8