Rooster (Foghorn) Lost His Feet to Frostbite and Gets New Feet! 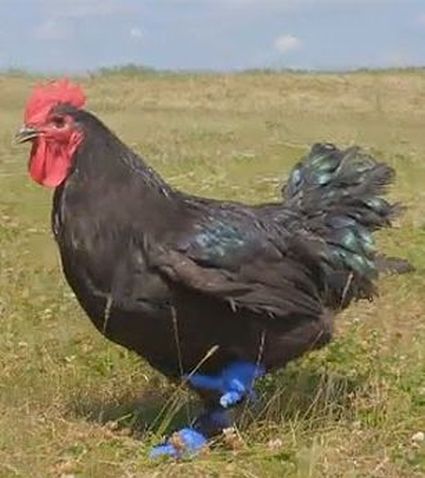 Foghorn the Rooster walking with his new feet. Photo used under creative commons from http://calgary.ctvnews.ca/3d-technology-gives-footless-fowl-leg-up-1.2463684
This happy rooster named Foghorn lost his feet to frostbite and was made a new pair of fake blue feet using 3D imaging and printing. Amazing!
This method was used on a duck before.
​Find out how they made his feet in our featured video below.

It took a few tries but Foghorn has adjusted quite well to his new feet as you can see.

Signs & Symptoms of Frostbite in Chickens 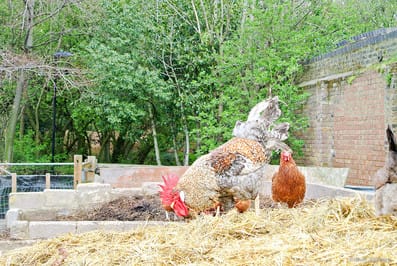 Yes, unfortunatly, chickens can get frostbite. The best way to keep them from getting frostbite is prevention but if you think your chicken may already have frostbite these symptoms and treatments will help. Some chickens like to play in the cold and snow while other's prefer to hang out in the hen house or coop in cold weather. Most heartier breed chicken (except ones that have been kept indoors in a controlled temperature environment) can keep themselves warm because their bodies are naturally designed to create warmth.  Even tho, they have this natural ability they are still in danger of getting frostbite on their combs, wattles, legs and feet which can cause deformities (Parts or all of combs and wattles can freeze and fall off) and lameness (Legs and feet can freeze and cause lameness and even toes falling off in extreme cases) in chickens and other poultry. See signs, symptoms, and treatment for frostbite. ​Go to Signs & Symptoms of Frostbite in Chickens
Go to Signs of Frostbite In Chickens

Motherhen's Tip of The Day: Preventing Frostbite in Chickens With Hay

When it snows or the temps drop below freezing I put hay on the ground outside which helps to keep the chickens feet from getting cold from the ground, gives them more heat when they sit down, and prevents them from having to walk on snow.--Motherhen

What to Do if Your Chicken Has Frostbite

If you know your chicken has signs and symptoms of frostbite this is what you need to do. See our step by step instructions on this page. Chickens who get frostbite can be treated and  if caught early enough can make a full recovery. In some cases where the damage is more severe, the affected body parts (usually comb, wattles, and feet) could fall off or need to be removed. Go to What to Do If Your Chicken Has Frostbite
Go to Frostbite-What to Do

If you are needing heat for your  coop and trying to determine which kind to get, see our pro's and con's of various types of heat available for hen houses and chicken coops plus Get the best deals on heaters. Go to Heaters for Hen Houses
Go to Heater's for Hen Houses

If you suspect your chicken may be sick, check our signs, symptoms and treatments for chicken illness to help you determine what is wrong and the best way to treat it. Go to Sickness-Signs, Symptoms, & Treatments
Go to Chicken Sickness: Signs, Symptoms & Treatments
About Corona Virus Covid 19 and Chickens. Studies show you cannot get Covid 19 from chickens or other livestock. The Covid 19 strain found in poultry and livestock is NOT the same strain that is currently spreading across the world in humans. Keep your chickens coops and all supplies clean and sanitized to protect your chickens.

​Do you like Chicken Heaven On Earth?
​Costs to re-home chickens and to keep this website up and running, as well as, secured and safe for my viewers are constantly rising. Any help of any amount would be greatly appreciated. If you would like to contribute you can do so safely and securely via our Paypal pool. Thank you for your support!
With Warmest Regards,
Rev.  Penny Dean
Owner of Chicken Heaven On Earth
Go to Chicken Heaven On Earth's Paypal Pool: ​https://paypal.me/pools/c/83wwtILbKR
Terms of Use/About Us/Disclaimer/Other Websites by Rev. Penny Dean
Contact Us: chickenheavenonearth@gmail.com
​
Header photo created using Canva.com and Luna pic photo editors.
Logo created using Logo garden
Photo used under Creative Commons from intoruth