How to Set Up Premier Electric Poultry Netting

Watch the setup Video and get free printable instructions on how to set up the Premier Electric Poultry Netting and things you shouldn't do when using the Premier Electric Poultry Net and a very important warning about using electric fencing around children. The following are instructions from Premier1.com on how to use their electric net. It is recommended that you use 42" netting for birds which do not fly and 48" for birds that do fly. 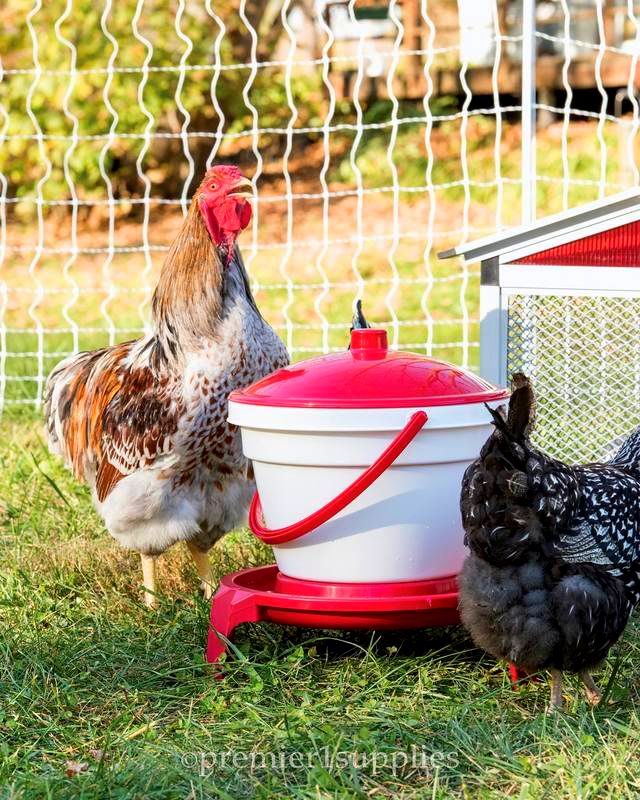 Photo Courtesy of Premier 1. https://www.facebook.com/premier1supplies/
Site preparation: Carry roll(s) to proposed fence line. Prepare line by trampling or mowing all vegetation over 4 inches tall. We often use a vehicle to make a track through grass or weeds and then install the fence along wheel track. For long fences needing 2 or more nets, we put the rolls into back of a vehicle and throw them out at intervals (determined by length of rolls) as we drive along making the path.
Untying the roll of net: Untie the 2 tie strings to release the roll of netting.
Unrolling the net: Grip all the posts as a group and lift them up in front of you. This allows the netting to unroll in front of you in a series of folded “pleats,” each attached to the posts in your hands. Lay unrolled pleats on the ground. Locate the beginning post. (It’s the post with 2 tie strings attached and a stainless-steel connector at the top. For PermaNet, this job is easier with 2 people (2). See more below...
Inserting the first post: Insert the beginning post into the soil beside a stronger support post or an existing fence. Use the 2 tie strings to secure the first post to the support post or fence.
Unfolding the net: Grip all remaining posts as a group and lift them up in front of you. Then walk backwards along the intended fence line, “feeding out” each post as it’s pulled from your hands, thereby unfolding the netting. To reduce risk of tangling the netting, try to drop or toss each post in sequence, helping to free it from the other posts you are still holding. Unfold entire roll of netting along the fence line. For PermaNet, this job is easier with 2 people.
Installing line posts: Start at first post, walk along fence line, picking up each post in turn and pushing it into the ground. Apply only enough sideways tension to each post to keep the netting erect and straight. Stretch it just tight enough to stand up well. If the netting is too tight, it cannot adjust to changes in terrain(2).
Joining 2 rolls of standard net: Start the second roll by placing its first end post next to the last end post of the first net. Use the 2 tie strings to tie them together.
Joining 2 rolls electrically: To join one roll of standard netting to the next to provide electrical connection, simply slide the built-in, stainless-steel male/female “power” connectors together by hand. Do not use pliers or force them. The 2 pieces of metal only need to make and maintain contact. To connect Pos/Neg, refer to “Connecting Pos/Neg Netting” section.
Extra Support: Use a PowerPost, Stirrup post, or FiberRod to provide extra support at the ends and corners. More support be needed depending on the type of netting, terrain and shape of the enclosure.
​See more below...

Connect energizer to standard net: For either a battery (DC) or plug-in (AC) energizer, attach the lead wire from the fence terminal on energizer top clip at the end of the net. Attach the ground wire from the ground terminal on the energizer to the ground-rod system. To connect Pos/Neg, refer to “Connecting Pos/ Neg Netting” section o.
​Checking voltage: Never put animals into an electric fence enclosure without first checking it for adequate voltage. The best tool for this task is Premier’s digital voltmeter (at left). Touch one contact point to the soil or metal spike of a line post and the other contact point to a positive wire. Voltage on a newly installed fence should exceed 3,000v. As time passes, grass or weeds will grow and touch the fence, causing the voltage to drop. Never allow it to drop below 2,000v. See more important information below...

How to Move and Remove electric Net

​Moving (or removing) the net: Disconnect the fence from energizer. Then walk along fence, progressively removing the posts for the soil and holding them (at left) in your hand in a tidy bundle. This allows the netting to fold together into 6-foot-long pleats as it drags along behind you. To keep the bundle of posts tidy, rest the tops against your belt or hip as you walk. Removing twigs and trash from the net: Remove twigs and trash as you fold it up. This will save time later when you reinstall the net. For PermaNet, this job is easier with 2 people.
Rolling up the net: After the length of netting is folded up, pick up posts as a group and shake the net a bit. This allows the folded pleats to straighten themselves. Then lay netting on the ground (as shown at left) and roll up the folds. Start with folded netting at end without posts and roll toward the posts. This will produce a roll much like it began—with all the posts on outside and the folds of net rolled up inside.
Tying up a roll: Firmly tie the roll using the 2 tie strings. It doesn’t have to be as tight as when new, but it needs to be tight enough to be easily carried or stored.

Things NOT to Do When Using Premier Electric Net

Fold the fence with the posts-Don't roll the fence up:Trying to roll up the fence like wallpaper or a carpet instead of folding it up with the posts. Result: A tedious chore that takes forever. People who try to “roll instead of fold” assume we’re liars about ElectroNet being an “instant fence.” Of course, the cure is to read the instructions—but nearly everyone assumes they don’t need to do that!
Don't use weak energizers-Using weak energizers. Many farm-store units are too weak to be effective with netting. This is particularly true of battery units and energizers with small solar panels. Result: Animals feel very little shock and try to push through or under the netting. As soon as weeds grow and touch the net, the weak pulse becomes no pulse at all. Animals will escape, netting is damaged and the user is upset and very frustrated.
Don't use a “weed chopper” energizer with netting: Result: The long-duration pulse of “weed choppers” melts plastic parts of netting (example at left) where it touches vegetation. Also, their pulse is very weak, so even if there are no weeds, animals will challenge the fence.
Don't Store Net Near Feed or Where Mice or Rats are present:Storing rolled-up fence on the ground near stored feed in a barn with rats and mice present. Result: Rodents gleefully respond to your care and concern for them in providing an ideal nest. They chew into the rolls, make themselves at home and severely damage the net. Instead, store netting far away from rodents and grain, or hang the roll off the ground
Don't allow children near the electric netting
Don't use electric fence or net for baby chicks or young pullets-Baby chicks can simply crawl through the openings in the net.
See more important information below...

Connecting the energizer to positive/negative netting

How to Connect 2 Rolls of Electric Netting

Terminating the End of Positive/Negative Netting

How to Convert Positive/negative netting to standard netting

At the beginning of the first net, attach top clip of net to lower clip. Then connect the lead wire from the energizer fence terminal to that combined set of clips. From the ground terminal of energizer, connect ground wire to ground rod system only. To convert multiple rolls, attach first net as described here. Thereafter, connect top clip to top clip and lower clip to lower clip, just as you would for Pos/Neg netting.

WARNING! warning! About Electric Fencing-KEEP children away from it

​Please Read! In 1991, an accidental fatality occurred when a very young child’s head came in contact with an electrified fence wire while the child was crawling through wet grass. The fence was correctly installed and functioning properly. The energizer was a small plug-in unit and UL approved. The fence wire was electroplastic twine—a relatively poor conductor compared to steel, copper or aluminum wire. We strongly caution adults to keep all small children away from all electrified fences. Children should be warned not to play in an area where electrified fences exist. Individuals of all ages should take extra care to avoid accidentally contacting electrified fences with their head or neck (2).
Print It
References: ​
1. Setting up electric fences for chickens. (2017). YouTube. Retrieved 19 December 2017, from https://www.youtube.com/watch?v=_BNsqzQ6wtA
2. (2017). Premier1supplies.com. Retrieved 19 December 2017, from https://www.premier1supplies.com/img/product/pdf/401.pdf
3. Premier 1 Supplies. (2017). Facebook.com. Retrieved 20 December 2017, from https://www.facebook.com/premier1supplies/photos/a.364620086896631.94017.116352505056725/1391496187542344/?type=3&theater
Use the search box below to find what you are looking for on our website.
About Corona Virus Covid 19 and Chickens. Studies show you cannot get Covid 19 from chickens or other livestock. The Covid 19 strain found in poultry and livestock is NOT the same strain that is currently spreading across the world in humans. Keep your chickens coops and all supplies clean and sanitized to protect your chickens.
Can't find what you are looking for on our site? Try Google Search