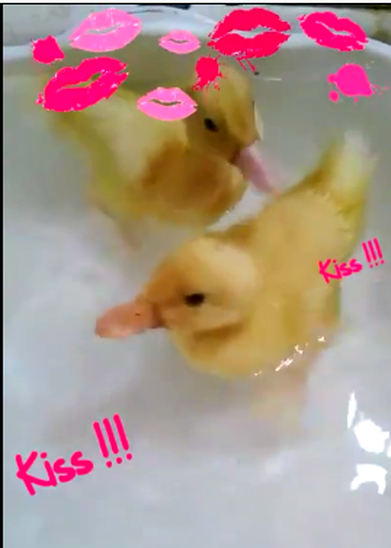 Baby Huey (front) & Ms. Daisy (white Pekin ducklings) taking their first swim. (c) 2018. Chicken Heaven On Earth
Sooooo, Let me tell you my tale of how I ended up with these cute baby ducks in the photo and then you can watch them swim in the video below. ​Now I am raising ducks too, even though I have previously said you should not raise ducks with chickens due to my past experiences with a mean Mallard duck who was terrorizing my chickens, flying away to neighboring properties and ended up getting shot by a duck hunting neighbor who thought he was a wild duck. I had swore off ducks but then, I walked into Tractor Supply and six little baby ducks forced me to take them home. As they grew I assumed the ducks would get in the duck house I made for them at night but they had different idea's and ran under the 3 bedroom trailer house I have converted into a chicken house. It was almost sunset and they wouldn't come out! I was terrified for them as I live on the Brazos River and knew they would not live until morning, predators would get them. Fighting my fear of being snake bit in the dark, I crawled under the trailer with a flash light and a small pet carrier hoping to blind them and catch them. No such luck, I managed to catch two of them. In the morning, I came out early to see if I could herd the rest of the young ducks into a pen but they were gone, never to be seen again. That left me with two three month old ducks which I immediately penned up. 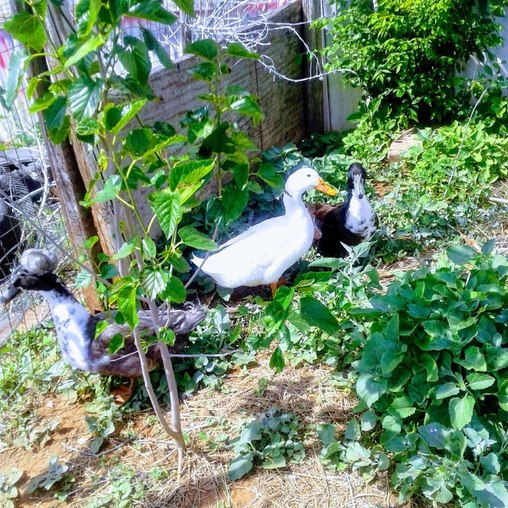 Found a good home for the two drakes on the right. Mr. Drake and Mr. Blackie Jo. Baby Puffy Head is a permanent resident. (c). 2018. Chicken Heaven On Earth
One night about 4 months later, I came home from the movies, opened my gate and 3 ducks came running into my yard. Whose ducks were these? It struck me that these 3 ducks had the same markings as my missing ducks. When they were introduced to the two ducks I still had left, they all seemed to know each other and my two ducks showed them where the food, and pool was, and herded them into the chicken coop that night. Strange. However, I asked around the neighborhood and one neighbor said they were his and I could have them for 10 dollars a piece because they didn't want them anymore. I bought them. A week later another duck showed up at my fence line, looked like someone had dumped him, none of my neighbors claimed him so I let him in. This put me with 3 drakes and 3 hens which is not good as all 3 drakes (males) would gang rape each of the hens. My girls were stressed out bad and I made up my mind I needed more girl ducks. I found a wonderful home for two of the drakes with a stock pond of their own and kept all the hens and one puffy headed drake.
Then there are these two cute little ducks in the first photo who just begged me to take them home from Tractor Supply, and I did- even tho I chided myself all the way home, thinking of ways to keep them safe and thinking this was going to be a big mistake. I was wrong. You can raise ducks with chickens if you get the right breed of ducks and make a few adjustments. I did my research before making my selection and had decided to try one more time with ducks and from what I had found the white Pekin duck was the breed of duck I decided upon because they usually get so heavy they cannot fly. So you can imagine my surprise when I found them, peeping, all cute and adorable, just waiting for me to take them home. (see video below).

Why I decided to keep ducks with my chickens after all

Things that made me decide to keep ducks again besides their obvious cuteness factors are:

Reason number one is ducks eat mosquito larvae and I live on the river so this is a good thing.
The second reason is the ducks help protect my chickens who are quiet at night and if a predator comes, they will be even quieter. You won't hear anything from the chickens until morning or until the very second a predator snatches them off their roost and the poor chicken starts screeching but by then it's too late for the bird. Ducks on the other hand will make a ruckus if any predator gets near the coop. I have cameras and baby monitors on my birds so if I hear a ruckus I will come running, rifle in hand and as it turns out these ducks have saved my chickens lives from skunks, raccoons, and even a hungry stray cat. They made so much ruckus I didn't even have to go outside, the predators didn't want to tangle with 5 loudly quacking, wing flapping ducks and left before I could get out the door. These ducks are worth their weight in gold to me. They are easy on the feed bill preferring to dig up roots and insects when I get the ground wet for them, they are cute and I am keeping them.

Problems I have encountered and Overcome Raising Ducks with Chickens

The first big problem I encountered is Ducks muck up the drinking water for the chickens which can cause the chickens to get sick with coccidiosis, so I changed my watering systems. I use poultry cups attached to 50 gallon blue barrels for the chickens and made a special watering system for the ducks I found on Youtube. The ducks love it and no longer bother with the chickens water. I also placed the chickens blue barrel under a three sided tin calf shed which seemed to make it less interesting to the ducks.
The second problem was emptying the kiddie pool every day. I went through half a dozen kiddie pools because they got ruined quick from lifting and dumping them on a daily basis. I decided a pond needed to be built and ordered a pond liner but before it got here, I researched a bit and found out that wasn't really an option unless the pond was really deep and huge and didn't need a pond liner.  So I researched some more and viola! I have found the miracle solution and it only costs a few dollars.