Moniliasis (Thrush) in chickens can cause breathing problems and even death. Find out how we got rid of it successfully. A white or yellow cheesy substance appears in combination with a runny nose. Usually it is contracted after being given antibiotics and/or from dirty water. See more symptoms and treatments here. 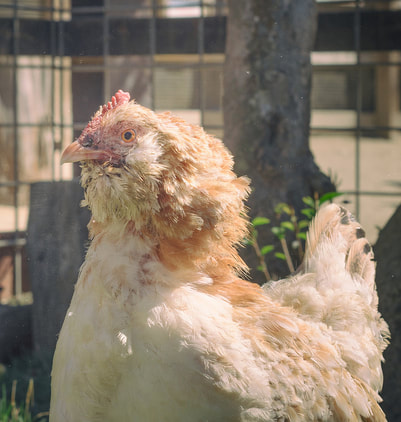 Moniliasis (Thrush) is a fungal disease contracted by chickens and other birds from moldy feed,  contaminated water, and after being given antibiotics, and from any surface which has been contaminated by other birds.  There is no known vaccine available but treatment and recovery is possible. See symptoms, treatments, and photos below. 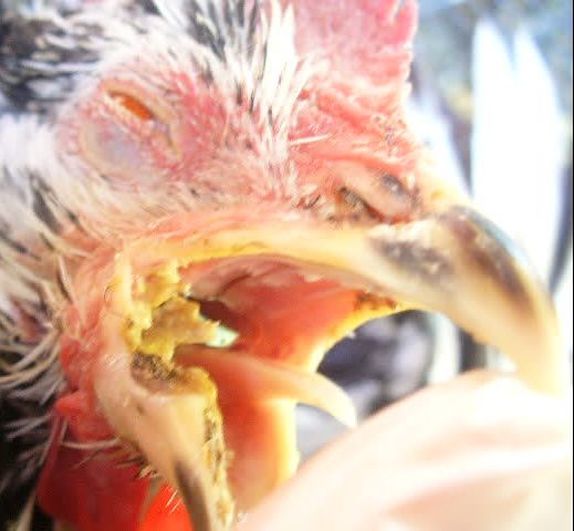 Fowl Pox-Symptoms: Scabs, lesions and streaming through the eye

See our list of chicken illnesses with signs, symptoms and treatments for each. Go to Chicken Sickness Treatments
Sick Chicken Treatments >>>

Go to Respiratory Disease
References: ​
1. - Chicken with thrush photo. Template. (2007). The Poultry Site. Retrieved 30 January 2018, from http://forum.thepoultrysite.com/discussion/comment/7317/
Use the search box below to find what you are looking for on our website.
About Corona Virus Covid 19 and Chickens. Studies show you cannot get Covid 19 from chickens or other livestock. The Covid 19 strain found in poultry and livestock is NOT the same strain that is currently spreading across the world in humans. Keep your chickens coops and all supplies clean and sanitized to protect your chickens.
Can't find what you are looking for on our site? Try Google Search