List of Chicken Predator's & How to Get Rid of Them

Protecting your chickens from predators

Oreo meets Sweet Pea the Rooster at Chicken Heaven On Earth
There are many ways to protect your chickens from predator attacks but none are 100 percent fool proof. However, using these techniques to protect your birds will significantly reduce the chances of them being attacked and killed by predators. The first step to protect your chickens is to buy or build a predator proof chicken coop and install solar powered electric fencing around the coop and run. Identify what animals prey on chickens and which ones have natural habitats in the area where you live, then identify signs that the predator may be prowling around (Installing a camera will usually show you). Approximately 90 percent of predators that will attack chickens are nocturnal (they only come out at night) unless the predator is rabid or in short supply of food. Since most predators attack at night, it is a good idea to make sure your chickens have a lighted, safe, secure hen house with a good lock on both the door and the smaller hen door if you have one. Predators do not like to come around when people are outdoors (with skunks being an exception). They wait until the chickens are alone and unprotected. A rooster will fight to the death to protect his hens but unfortunately rooster's are not equipped to fully protect them from a full scale attack especially if there is no light in the hen house (as chickens rarely move around in the dark) a rooster can do little if anything to protect the hens in the dark. If there is light they can at least try to get away. There have been documented incidences where the predator was killed by the rooster and hens in the run or the hen house, However, there is no survival rate in a dark hen house.  Provide solar powered lights for you hen house and coop to give your chickens a chance to escape or defend themselves at night. If you have a couple dogs that you can leave outside at night (preferably a male, unneutered dog) you have a pretty good chance of protecting your chickens. One dog by itself may have a hard time with some predators, like coyote's, but if you have 2 or 3 dogs they will gang up on the predators and can usually kill them without to much trouble. It is a good idea to watch how your dogs interact with your chickens as your dog may become a predator if he gets a taste for them. Getting a donkey can deter many predators like coyotes, foxes, and raccoons. The following is a list of predators, and how to get rid of them. 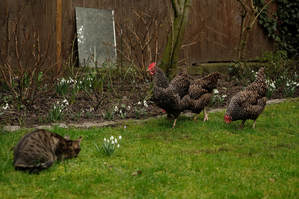 Cats are well known for their attraction to birds and many cats who chase wild birds-eat them, so it is not uncommon to find out that your cat, your neighbor's cat, or a stray cat, could be your chickens worst nightmare. Find out why and how to stop them here:
Learn More

Coyote's: How to Protect Your Chickens From Them

Coyote's run in packs, so if you see one there are many more close by. The natural enemy of the coyote is donkeys. If coyotes smell or see a donkey they will not come near. If you want to protect your chickens from coyote's-getting a donkey, either a gelded male (Jack) or a female (Jenny) is your best bet. Make sure your coop is secure so coyote's and other predators cannot dig under or climb over it. You can put hardware cloth along the bottom, extend it out approx 8-12 inches on the ground. This will prevent the coyote from digging into your coop or run.  See more ways to protect your chickens from coyote's here:
​Go to How to Protect Your Chickens From Coyote's
​Scroll down to see more chicken predators.

Dogs-least suspected and one of the most likely chicken predators

Your dog or a nearby neighbors dog could be your number 1 least suspected predator. Find out how and why dogs are one of the most likely and least suspected chicken predator's and how to stop them here:

The fox has often been labeled as the chicken's number 1 enemy. Find out how to stop a fox.

Disappearing Chickens? Hawks Are The Most Likely Suspect-How to Protect Your Chickens From Hawks

Hawk
Have you got chickens disappearing into thin air with no traces of struggle-hawks are the most likely suspect! Find out how to stop them here: Go to how to protect your chickens from hawks

How to Protect Chickens From Hawks >>>

How to Protect Your Chickens & Eggs From Opossums

Possums are attracted to more than just dead things and trash, they also like eggs, feed, and sometime's baby chicks. Find out how to stop possums here: Go to How to protect your chickens from possums
How to Protect Chickens From Opossums >>>

How to Protect Your Chickens From Raccoons

Raccoon's and chickens don't mix. During the fall raccoon's have a tendency to hang around for the winter under or near chicken coops for a steady supply of food and water. A hungry raccoon can make a huge mess, carry rabies, and a nesting or mother raccoon can and will  harm or kill your chickens by ripping them to shreds while they are still alive. Protect your chickens! Find out more about them and how to get rid of these cute but vicious predators here:
How to get rid of raccoon's around your chicken coopHow to protect your chickens from raccoon's Go to How to Protect Your Chickens from Raccoon's
How to Protect Chickens from Raccoons >>> 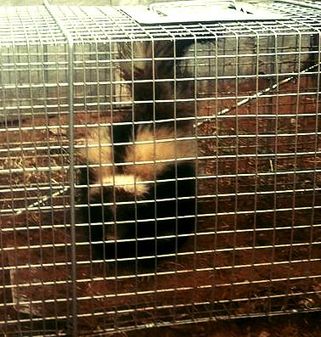 Baby Skunk Captured at Chicken Heaven On Earth 2017
Skunks will bite into eggs and suck the fluid out of them, they will eat baby chicks, kittens, and small puppies. Skunks are non aggressive and usually do not kill chickens unless cornered by an aggressive hen or a protective rooster. However, when a skunk is confronted by a broody hen they may harm or kill the mother hen to get to her eggs. Find out how to get rid of them here:Go to How to keep Skunk's Away from Your Chickens
How to Protect Chickens From Skunks >>>

How to keep snakes away from your chicken coop/hen house 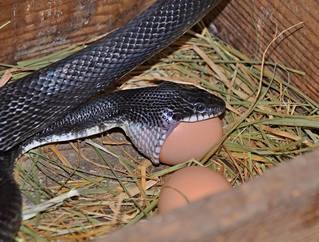 Snake eating a chicken egg. Photo from Tedge's Photography. https://www.facebook.com/TedgesPhotos/
Snakes will hide in the nest and eat the eggs right out from under your hen not to mention that they may bite, eat, and kill your chickens. Find out how to get rid of snakes here:
Go to How to Get Rid of Snakes
How to Protect Your Chickens from snakes >>>

Weasels-How to Protect Your Chickens From Them 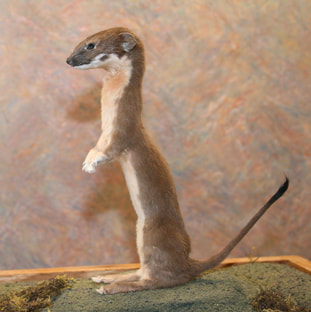 Live traps are a very humane way of getting rid of predators. Be sure to only put the traps out at night after your chickens are put up, or outside their run and coop so you do not catch one of your chickens by accident. It is also advisable that you have a backup plan of how you plan to dispose of the animals you catch. Taking an animal to an unfamiliar are and dropping it off could mean a horrible death for the captured predator or you could be dropping it off where it could harm someone else's critters. Contact your local animal control to find out how to properly dispose of the captured predators.

Today's Verse:
But let all who take refuge in you be glad; let them ever sing for joy. Spread your protection over them, that those who love your name may rejoice in you. Psalms 5:11

Using A Donkey as Predator Protection for Your Chickens & Other Livestock 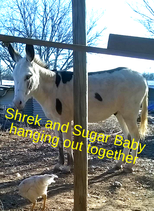 Thinking about getting a donkey to protect your chickens? We think it's a great idea! Many people recommend a Jenny (female) donkey to protect livestock but from our experience a Jack who has been cut works great. Donkey's are natural pack animals and are very protective of their pack and property. We have had Shrek for two years and have no predator problems (with the exception of skunks) since he has been here, not even a snake. Update on our donkey named Shrek and the progress he has made with our chickens plus how to use donkey manure for heat. Check it out! You will be surprised!
​Raccoon
​Racoon's may be cute but they are extremely dangerous to your chickens. They are crafty and can figure out simple locks. Find out how to get rid of raccoons here: Rats and mice
Rats and mice are after your chicken feed and can eat up more feed than your chickens if left unchecked. Not only that but they have been known to bite chickens, eat eggs, and they attract snakes. Find out how to get rid of them here: Owls
Owl's are primarily nocturnal and are well known for snatching chickens from tree branches at night. If your chickens roost in the tree's you need to stop them and make them go into the hen house at night. Owl's have been known to strike in the early evening. Find out how to stop owls from eating your chickens here: Other Predators

Top Ten Ways to Protect Your Chickens From Predators

See More Ways to Protect Your Chickens From predators