Bone types in chickens (and other birds), fused bones, names of bones and more. 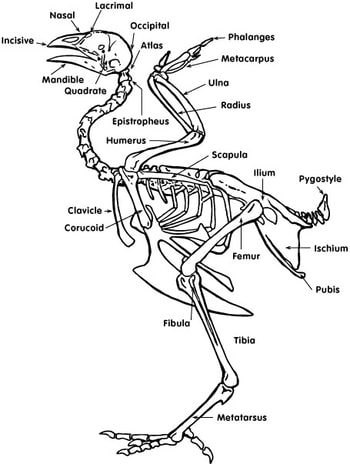 Photo used under Creative Commons from https://tbnranch.com/2012/01/15/chicken-anatomy/
​The chicken skeleton provides structural support for the bird but also has two other functions, respiration and calcium transport. The main two types of bones which the skeleton is comprised of are the pneumatic bones and the medullary bones.
Pneumatic Bone Function: The pneumatic bone helps chickens to breathe correctly.There are actually air sacs inside the bone. "A hollow bone filled with air, connected to the respiratory system. Many of a bird's bones are pneumatic, with struts across their hollow interiors to provide a combination of light weight and strength as an adaptation to flying" (Peter Weaver's Birdwatcher's Dictionary).
Medullary Bone Function: "Medullary bone is a special bone tissue forming on the endosteal surface of the medullary cavity in the bones of female birds prior to and during egg-laying to serve as a calcium reservoir for building the hard eggshell. It has also been identified in non-avian dinosaurs, where its presence is considered as a reliable indicator of a sexually mature female (Scientific Reports, 2014)"
Fused Bones:Bones in the foot or shank are fused which causes the birds to walk upright. Many vertebrate located along the backbone are also fused which helps they fly.(Poultry anatomy and physiology pdf, 4). See a list of bones in the chicken skeleton below...

Names of Bones on The Chicken Skeleton

Chicken Breast Bone (Sternum): The sternum is the largest bone in the chickens body and covers more than half of the body cavity. The sternum has a carina (a large kneel) used to attach the wings which give the bird the ability to fly. Chickens usually cannot fly well or can only fly short distances if they can fly at all. Many times chickens can fly when they are young but once they gain weight in the adult stage are no longer able to fly. This is do to the fact that the carina is not as large as it is in other birds who fly well. The breast bone is attached to five or six pairs of ribs which protect the chickens internal organs. The breast bone length varies depending on the breed of chicken. For example, Bantams, obviously would have a shorter breast bone than standard size breeds.
Chicken Backbone: Chickens are vertebrates (animals which have a backbone). Depending on the breed of chicken most breeds have about 20 vertebrae. The backbone of the chicken starts at the atlas (a small bone at the top of the spine) which allows the chickens to move their head. The spine of the chicken ends at the cervical bone.
"THE WISHBONE:
The wishbone is the slingshot looking bone and is sometimes pulled apart and a person who gets a larger part makes a wish. The wishbone is actually a clavacal or collar bone. It connects the shoulders of a chicken. It also makes an opening so that digestive and respiratory tract can pass into the chickens body.
NECK:
The neck aid in the reaching of food located on the ground. The rigid body would make this simple activity more difficult without the modification aid of the adjustment of the centre of gravity which is needed when the bird changes from the upright position of walking or perching or to the more horizontal position of flight. The bones of birds are also lighter in weight than those of their mammalian counterparts. A chicken has fourteen neck vertebra that are small and highly flexible. Chickens can turn their heads 180 degrees and they are also able to move it vertically and horizontally.
PNEUMATIC BONES:
Some of the bones are hollow and actually act as part of the avian respiratory system. They are called pneumatic bones (pronounced New-Matic) and include the skull, humerus, clavicle, keel (sternum), pelvic girdle, and the lumbar and sacral vertebrate.
MEDULLARY BONES:
Another important type of bone in the avian skeleton is medullary (pronounced Med-U-Larry) bones. These include the tibia, femur, pubic bone, ribs, ulna, toes and scapula. Medullary bones are an important source of calcium when hens are laying eggs. Egg shells are primarily made of calcium and a hen mobilizes 47% of her body calcium to make an egg shell. When in production, a commercial-type laying hen cannot obtain enough dietary calcium for daily egg production. Without medullary bone to draw calcium from, the egg shells would be very thin and weak" (5).
References: doi:10.1038/srep06253. https://www.nature.com/articles/srep06253
2. Weaver, Peter (1981). Pneumatic  bone.​https://www.birdcare.com/bin/showdict?pneumatic+bone

5. Poultry club of South Africa. Retrieved on Nov. 10, 207 from http://www.poultryclubsa.co.za/anatomy-of-chickens/
​