Several ways to keep your urban rooster quiet such as keeping him in the coop until after the hens lay their eggs, several other neat tips, and as a last resort, you can use a rooster collar. 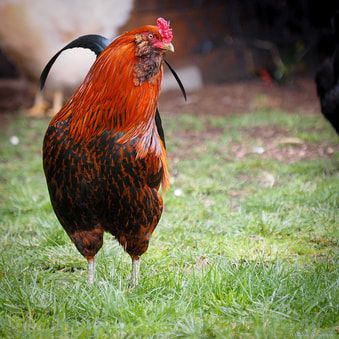 The easiest way to keep neighbors from hearing your rooster is to keep the rooster indoors until after egg laying time. He will still crow if someone approaches your home or vehicle but being indoors the sound will be muffled.
Roosters crow less if they have access to several hens. An imitation mate can be used if he does not have any hens. A stuffed teddy bear for larger Roosters and a balled up sock works nicely for bantams. Be sure to wash their imitation mates at least once a week to prevent bacteria from accumulating.
Make sure your rooster has plenty of fresh feed, scratch, fresh water & vegetables to keep him busy.
​Sound proof your chicken coop.
Black out curtains can be used on windows if the rooster is kept indoors during the wee hours of the morning and  when the hens are laying eggs. This works for some roosters but not all.
Play a radio or television for him so he does not hear the cries from the hens while they are laying eggs.If your rooster can hear other roosters crowing he will crow too.
Identifying your rooster's crowing pattern can help to reduce the problem. The fact is that roosters have an internal clock that tells them when to crow, so if you have nearby neighbors that are bothered by crowing or do not like the crowing sounds a rooster naturally makes you should consider giving him to someone who lives in the country where a rooster can crow as much as he likes.

Identify  the pattern of your roosters crowing and you can reduce or eliminate the problem.
Roosters will crow (for the most part), early in the morning to announce the dawning of a new day. They will crow again, around 11am-1pm to announce the arrival of the new eggs. In the evening, the rooster will call out to their ladies and babies (and even to you) to get to shelter for the night. If you listen to their crows and watch to see what they are trying to show you, it is much easier to figure out what they are crowing about.
Roosters Will Warn You
They will call out to warn you if company has arrived, a prowler or uninvited animal is in the area. I keep mine confined during peak crowing times like early in the morning and at egg laying time. All afternoon they play happily and quietly in their rooster runs with their preferred hens and in the evening I bring them back to their pens in the hen house.

No Crow Rooster Collar & A Warning

Though I have never used a collar on any of our roosters many people have told me that the The No Crow rooster collar does work but doesn't stop the rooster's crow all together.
​WARNING: It is important that you do not put the collar on so tight that it restricts the roosters breathing or eating. Do not leave your rooster unsupervised while wearing this collar because it could get caught on something like a branch, if you put it on too tight you could strangle your bird to death. I personally do not recommend using rooster crow collars. Partially strangling a bird to keep him quiet does not sound like a humane way to stop a rooster from crowing to me.

Featured Video: How to Stop a Rooster From Crowing-The No Crow Velcro Collar

"Don Feather explains how he managed to stop his favorite rooster 'Elvis' from crowing all day. The 'no crow rooster collar' is a velcro collar, which diminishes the force behind a rooster's crow. It makes the crow almost sound like a burb. Don Feather's chickens are not very impressed by Elvis's new sounds. That's why Elvis does not even try to crow that often anymore. Little does he know that the 'rooster collar' keeps him alive, and not soup..."--Don Feather.
More information at: http://www.itkeepsyoualive.com/how-to-stop-rooster-from-crowing-with-collar.html​

No Crow Collar Red Bowtie..Talk About CUTE!
Fun Item for your Rooster

Apparel for your Rooster's Collar

Attaches to the No-Crow Collar

Made in the U.S.A. (currently out of stock)

Find out More Great and Interesting Stuff About Rooster's!

​Find out about rooster's-the forgotten bird! How to keep roosters quiet, How roosters are as pets, Using rooster's as home alarm systems, The homeless rooster, Rooster vintage signs, Reasons to adopt a rooster, Rooster mating rituals, Rooster art cutting board, What happens to baby roosters in the commercial egg industry, and more...