How to Keep Raccoons Away From Your Chickens

How to keep raccoons away from your chicken coop 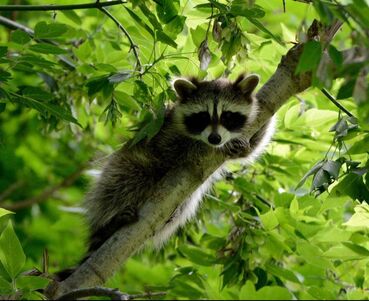 Raccoon Photo by Alex Makarov on Unsplash
Raccoon's  sometimes make their homes under hen houses and seem to get along quite will until they have baby raccoon's then the mothers tend to be fierce and protective of their young-just as most bird and animal mothers are. During this time a mother raccoon will kill anything she deems a threat to her young, including your chickens! According to Raccoon's Wildlife conflicts information website raccoon's have favorite places they like to nest or live in.
Raccoon's favorite places to live are in: Some people keep raccoon's as pets and do well with them but other folks who have chickens and other poultry, and rabbits are looking for ways to get rid of them. Knowing and understanding an animals habits can help you to keep them away or to take care of them if you have them for pets. If you have chickens it is not recommended that you also have a pet raccoon because raccoon's are very territorial and will protect their den with deadly force. (Wildlife conflicts, 2013),
Raccoons are unique in their appearance as they have a black mask around their eyes, which clearly distinguishes them from other animals, paws that work like hands, and a long fluffy tail. Rogue raccoons can be very messy, troublesome, and even dangerous to chickens and people.
Learn their Habits
One way to get rid of raccoons is to learn about their natural instincts, and habits. If you raise chickens, you will most likely run into a raccoon or a whole family of them  in the fall or spring when they will be looking for food to eat and a place to have and keep their young (a den) for the winter.
Where raccoon's live
Raccoon's have specific areas that they prefer to live in and often choose to live under or somewhere close to chicken coops as they know there is a steady food and water supply for them and their young.
Scroll down to find out how to protect your chickens from raccoon's

Featured Video: Keep Raccoons Away with some easy tricks

Easy home remedies to deter raccoons are featured in this video, such as freezing organic waste to reduce the smell that attracts them or using dish soap, castor oil, and water mixed with equal parts. Cayenne pepper can be strategically placed at night to deter them (be careful that your chickens do not have access to the pepper). Lights and noise can also keep raccoons away.  Scroll down to see the best ways to keep raccoons away from your chickens.

How to protect your chickens from raccoons 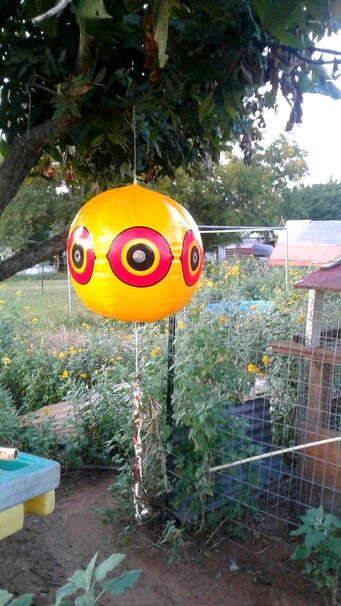 Scare X Balloon at Chicken Heaven On Earth. Comes in a pack of 3.
Wild raccoon's are dangerous for your chickens, not only do they make huge messes and often carry rabies but they have been known to attack and kill chickens. I use a combination of the following methods to protect my chickens from raccoons and so far it has been working very well for many years.
Put secure locks on chicken coop doors. Cover windows and screens with heavy mesh.
Keep feed put up, do not leave pet food out. Put trash in secure containers.
Use Predator Lights.
Use Scare crows with bird scare tape on them.
Use Bird X Repeller. I use the Bird X Repeller and Scare X balloons in combination with previous mentioned methods but so far Bird X repeller and Scare X balloons,  work the best. Since, I have installed them, I have had no skunks, snakes, raccoons, or coyotes. Hawks avoid my property but screech in protest when they get in range of this device. The Scare X balloons seem to be working as well. I had a skunk kept getting into this chicken coop. I also have raccoons trying to get into three coops that are out of range of the Bird X repeller so I use the Scare X balloons by these cages and so far it's working! The only cage the coon goes by is the one that doesn't have a balloon an is out of range of the Bird X Ultrason. (I will be getting another one and more balloons soon).
<
> 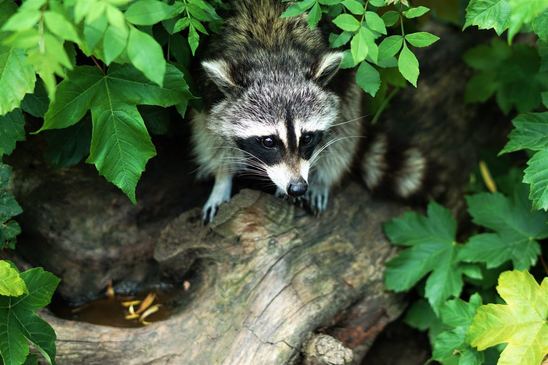 What Raccoons Usually Eat. Photo by Erwan Hesry on Unsplash
The average wild raccoon diet varies with their environment but these bandit, ring tailed cuties will not only dine on insects, fruit, fish, and berries but they can wreak havoc on your trash searching for food, and on your egg production  as they will eat chicken eggs. Often pregnant raccoons choose to have their babies near chicken coops so that their babies will have a steady food supply. Their young may seem harmless eating feed and eggs but as they grow their mother will teach them to hunt for meat..starting with your chickens. These cute bandit faced, ring tailed fluffy  mammals can weigh anywhere from 4 to 23 lbs according to a report by National Geographic
Raccoon's eat: In the wild they tend to find their food in the waterways and even domestic raccoon's seem to have this natural instinct to hunt and wash their catch, as they can often be seen washing their food in their water dish. Raccoon's are not vegetarians and as meat and vegetable eaters they can become an immediate danger to your hens who are nesting or any chicken that happens to wander into or cross paths with a hungry raccoon. Your chickens have little if any of a fighting chance against a hungry meat eating raccoon which has  lightening quick reflexes, razor sharp teeth, and flexible paws with equally razor sharp claws. Wild coons who have been usurped from their forest homes due to urban housing spreading further and further outward and leaving little room for wild creatures to find food, are now finding more and more skunks, deer, wild birds, raccoons, and other animals from the wild in their backyards, tearing up the trash, or brutally killing house pets, like small dogs, cats,  and chickens during their search for food. Coons have a tendency to prefer eggs over chicken meat but hens who are broody or laying eggs will not give up their eggs easily and will sometimes try to fight the raccoon to protect her brood of eggs. If her rooster is nearby
(as they often guard the nests of their broody hens) it is not uncommon for the rooster to attack any predator who approaches the nest, including a hungry raccoon. The rooster may put up a good fight but in the end, in most cases, the rooster and hen will be murdered and the eggs will be gone. If the raccoon is a female with baby raccoon's they will more than likely eat the rooster and hen as well. If disturbed during their feast they have been known to carry off the carcass of their victims or come back for them. Please share with us your experiences with raccoon's and chickens and how to stop them with our us and others who wanted to protect their chickens from these vicious attacks. While the best way to protect your chickens is prevention, keep your chickens locked up at night in a secure chicken coop. Raccoon's are smart and strong and can easily figure out hook and eye locks, or slide bolt locks.  Padlocks are a sure way to prevent raccoon's from getting the door open. Even though raccoon's tend to be nocturnal feeders it is not uncommon for them to go looking for food in the morning or early afternoon. (National Geographic, 2013).
Raccoon, Procyon lotor Retrieved on Nov. 6,2013. National Geographic. http://animals.nationalgeographic.com/animals/mammals/raccoon/?rptregcta=reg_free_np&rptregcampaign=20131016_rw_membership_n1p_us_se_c1#

One of the quickest ways to get rid of raccoons I have found, is to trap them and call your local animal control to find out how to dispose of them. If you use traps, once you catch a raccoon in it, you will need to clean it well, move it to another area, and camouflage it as raccoons are very smart and once they have seen a coon get trapped they will not go in the trap. Make sure you have a large trap for raccoons and stake the trap down. Smart coons will figure out a way to turn the trap upside down so the door will open and they will escape. I do not use the jaws and spring traps as they are very inhumane. Any animal caught in a trap like that will have to be put down due to brutal injuries. I do use cage traps. See best selling raccoon traps here: amzn.to/2xv5cni

I use solar powered motion detection lighting around my coop and entire property. When the sun goes down the red lights blink off and on giving the approaching predator the idea that another predator is already in the area. Most nocturnal predators do not like the light and will leave or hide in the darkness out of range of the light when it comes on. I put them on all sides of my chicken coop to scare the predators away. "I live in an area thick with predators, chiefly raccoons, coyotes, opossums, and hawks and I use predator lights and play a radio at night, as well as, keeping my chicken coop lighted dimly, and the area surrounding it I use solar powered motion detector lights which come on when something comes within range and blinking red predator lights. So far this method has worked for more than two years." Motherhen. See best buys on Predator lights

Motion Detection Lights (I use Solar Powered Ones) Can Deter Predators

Motion detection lights come on when a person or animal comes within range. I like solar powered motion detection lights because they come on while I am walking down my path to the chicken house. I also like them on all four sides of the chicken coop, shed, house, etc. The light suddenly coming on will deter some predators (people predators for sure< lol). If I look outside to check on my coops and I see the motion detection light on I can usually see what triggered it too and if it's a predator, I am on the hunt to keep it away from my chickens.
See more ways to stop predators and our list of most common chicken predators
References:
1. Raccoons. retrieved 10/31/2013. Wildlife conflicts. Purdue.edu http://www3.ag.purdue.edu/entm/wildlifehotline/pages/raccoons.aspx
2. Raccoon, foliage, nature and animal HD photo by Erwan Hesry (@erwanhesry) on Unsplash. (2018). Unsplash.com. Retrieved 22 September 2018, from https://unsplash.com/photos/f2Tf9uF1MeQ​
3. ​Raccoon baby photo by Alex Makarov (@alex_makarov) on Unsplash. (2018). Unsplash.com. Retrieved 22 September 2018, from https://unsplash.com/photos/dngNIgCHoc8
Use the search box below to find what you are looking for on our website.
About Corona Virus Covid 19 and Chickens. Studies show you cannot get Covid 19 from chickens or other livestock. The Covid 19 strain found in poultry and livestock is NOT the same strain that is currently spreading across the world in humans. Keep your chickens coops and all supplies clean and sanitized to protect your chickens.
Can't find what you are looking for on our site? Try Google Search