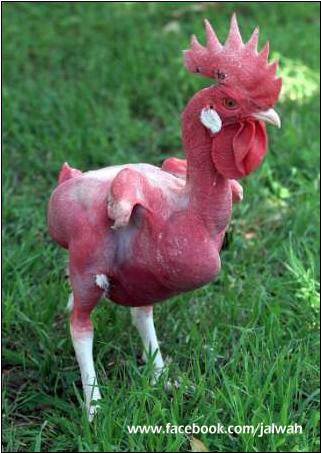 Featherless chicken. Jalwah. Facebook. ​https://www.facebook.com/Jalwah/
The featherless chicken is considered a rare, exotic breed. They are a bare skinned prototype, a genetic mutation created by an Israeli geneticist. Avigdor Cahaner of the Hebrew University of Jerusalem who produced the featherless peeps by cross-breeding a naturally bare necked chicken with a regular broiler chicken. Commercial broiler hens were genetically bred to cause them to eat more and gain weight fast which causes their body metabolism to operate at higher temperatures than ordinary chickens. Their heart rate can go as fast as 300 beats a minute. This causes them to overheat especially in warmer climates. The cost of cooling the chicken houses to keep the birds comfortable and reduce deaths Cahaner developed a breed that grows no feathers and have no scales on their legs and feet. After six generations of breeding he was able to create the featherless bantam chicken and then he cross bred until he got a large sized version. He points out that sexually mature males turn red.(2).
Cahaner says the benefits of raising featherless chickens are:
Lower in calories (for those of you who eat chickens).
Faster-growing (than standard breeds).
Environmentally friendly (because they do not lose feathers?)
More likely to survive in warmer conditions
Critics of genetic mutations of birds and animal's have a different story to tell.
"Critics say past experience with feather-free chickens resulting from random genetic mutation shows:
They suffer more than normal birds
Males have been unable to mate, because they cannot flap their wings
"Naked" chickens of both sexes are more susceptible to parasites, mosquito attacks and sunburn.
"Featherless birds would also be very susceptible to any temperature variations - especially as young birds," says Tom Acamovic, of the Scottish Agricultural College in Ayr (Young, Emma, 2002).
​Watch our featured video and see more photos of featherless chickens below.

This video tells how featherless chickens were developed. They were actually bred to be featherless so that the chickens would not get overheated in hot and arid areas where many commercial chickens are raised.

See exotic chickens like the "Black chicken" who is black inside and out, Polish chickens, Silkies, and many more! Go to Exotic Chickens
Exotic Chickens >>>