The Unusual Origin of the Cream Legbar Chicken 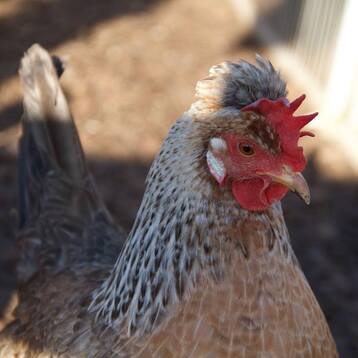 Cream Legbar Hen photo from Newland Poultry on Facebook. https://www.facebook.com/NewlandPoultry/
After World War 1 Britain (known for their poultry flocks) was struggling to make an economic comeback. They did not have any feed to spare so they would cull the male chicks. The problem was they did not know how to sex the male chicks. Dr. Reginald Punnet (professor of Cambridge) founded a genetic study in an effort to solve the problem of sexing the chicks which took more than two decades to accomplish his goal. of sexing chicks.
During his studies he managed to cross a Campine and a Plymouth Rock hen and the result was chicks that could be easily sexed right after hatching. The results were definite and the bird's were shown at the 1930 World Poultry Congress at Crystal Palace in London.While researching information about the Cream Legbar breed I found some most interesting history from Greenfire farms. "After offering the cambar as a practical solution to the problem of sexing day-old chicks, Punnett then departed on a more fanciful path. The second breed produced by Punnett, and the one that reveals his quirky wit, was a combination of at least three breeds: The brown leghorn (for its legendary egg laying ability), the barred Plymouth Rock, and the exotic araucana that had only recently made its way to Britain from the remote regions of Chile (for its blue egg laying ability and its jaunty feather crest). Punnett’s work yielded a shocking mix of the practical and the whimsical; an auto-sexing breed with flamboyant feathers that cranked out an enormous volume of sky blue eggs. While Punnett would later go on to create more than a dozen auto-sexing breeds, it is this breed, the cream legbar, that today enjoys a place in the commercial flocks of Britain.

In 1929, Punnett began the initial breeding experiments that were to yield the cream legbar. It took almost two decades and the dedication of Michael Pease to produce a bird that was genetically stable and exhibited the odd array of traits first envisioned by Punnett.
Cream legbars were first introduced at the London Dairy Show in 1947
Cream legbars received a written standard by the Poultry Club of Great Britain in 1958.
"While they probably began as merely a demonstration of Punnett’s skill in manipulating the chicken genome, legbars grew in popularity to fill a niche market in the British egg industry for pastel eggs produced by free-range birds. Today a variant of the Cream Legbar are often called Cotswold Legbar produces eggs borrowing the name of Britain’s productive and beautiful pastoral region—and are viewed as the pinnacle of locally produced gourmet eggs in that country" (Greenfirefarms.com).

Punnett started the first breeding experiments to produce a genetically stable bird that had the traits that we see today and Punnett wanted in 1929. Punnetts efforts proved successful as the Cream Legbars were introduced at the London Dairy Show in 1947 and received a written standard by the Poultry Club of Great Britain in 1958."While they probably began as merely a demonstration of Punnett’s skill in manipulating the chicken genome, legbars grew in popularity to fill a niche market in the British egg industry for pastel eggs produced by free-range birds. Today a variant of the Cream Legbar are often called Cotswold Legbar produces eggs borrowing the name of Britain’s productive and beautiful pastoral region—and are viewed as the pinnacle of locally produced gourmet eggs in that country" (Greenfirefarms).
A small unique breeding flock of of Cream Legbars from two distinct bloodlines of auto-sexing chickens were imported to the United States by Greenfire Farms. (Scroll down to see what auto-sexing chickens means).
The Legbar chicken was created by cross-breeding Barred Plymouth Rock chicken, Leghorns, Cambars, and in the case of Cream Legbars, Araucanas. The Araucana blood in the Cream Legbar is reflected in its crest and blue to blue-green eggs. (Wikipedia).

How to Sex Cream Legbars

Sexing Cream Legbars is much easier than sexing most chicken breeds because the males have a white spot on the back of their head and the females have stripes (which look alot like a chipmunks) running down their backs.

If you would like to visit Appalachia's Homestead on Facebook. ​Copy and paste this URL into search bar: https://www.facebook.com/Appalachias-Homestead-with-Patara-260231104167465/

"Sex-links are cross-bred chickens whose color at hatching is differentiated by sex, thus making chick sexing an easier process. Sex-links come in several varieties. As hybrids of laying or dual-purpose breeds infused with extra vigor via heterosis, sex-links can be extremely good egg-layers which often produce 300 eggs a year or more depending on the quality of care and feed. The color of their eggs vary according to the mix of breeds, and blue-green eggs are possible.
Chicks of a single breed that are similarly sex-linked are called auto-sex chickens, a term developed to differentiate between sex-linkage in purebred chickens versus sex-linkage in hybrids". (Wikipedia).