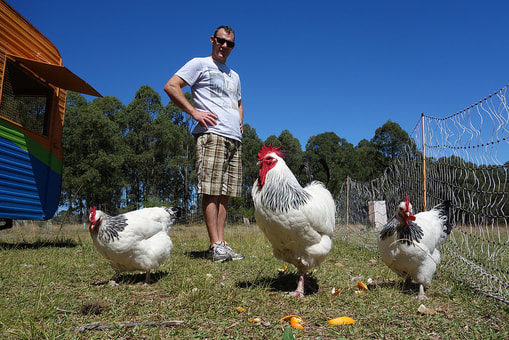 Happy Backyard Chickens doing what commercial poultry can't do
People are showing lots of interest in how chickens are reared, housed, how they are treated, what they are eating, what antibiotics and other medications the birds are being fed (see video below) and there is good reason for it. Studies show people want to be healthy and in order to do that they need to eat healthy food which is one reason many people have started raising backyard chickens though most never suspected how attached you can get to a chicken.
​Nobody wants to eat a sick chicken or a chicken that has been fed so many antibiotics, in an effort by the commercial poultry industry, to make them grow bigger and faster and it works. The birds grow so fast that it cripples them (such has been the case with the broiler hen industry for decades) Giving too many antibiotics or misusing them by giving them to birds who are not even sick, allows antibiotics to change and build in human bodies causing people to become antibiotic immune which gives them few options to fight off any infection because antibiotics from the doctor won't work anymore due to the amount and frequency antibiotics were fed to poultry being consumed by people.
​According to the FDA, Antibiotics used for treating infections (which are caused by bacteria) save countless lives but misusing and overusing them causes  the bacteria to change in a way that it eliminates the effectiveness of antibiotics and results in antibiotic resistance  and this has become a public health issue that consumers are becoming more and more aware of. Not only does it make treating patients more difficult but this antibiotic resistant bacterium can even spread to other people. Antibiotic resistance causes longer illnesses, more complicated illnesses, more doctor visits, use of stronger and more expensive drugs, and more deaths caused by bacterial infections. Some examples of bacteria that has become antibiotic resistant are species that cause skin infections, meningitis, sexually transmitted diseases, and respiratory tract infections, such as pneumonia.  Chickens do need antibiotics from time to time to treat specific health issues as discussed in the video below but constant use and overuse is the problem that is being addressed. In cooperation with other government agencies, the Food and Drug Administration (FDA) has launched several initiatives to address antibiotic resistance ( Combating Antibiotic Resistance, 2018). Poultry farming is big business and keeping chickens healthy has become a major concern for the poultry industry as well, thanks to consumers and public awareness stemming from websites and animal rights activist groups consumers have made their concerns known to the poultry industry.
Georgia is the #1 poultry farming state bringing in $3.8 billion dollars annually. Their team of researchers are helping them to become the nation's leaders in poultry research and innovation. Approximately 138,000 jobs are provided directly or indirectly to poultry production according to Todd Applegate head of the Department of Poultry Science at the University of Georgia. ​"In short, ensuring the health and well-being of our birds in Georgia is critical to the economy of our state."
Applegate joined Georgia's faculty in 2016, the same year Congress committed $114 million to update USDA/Agricultural Research Service's National Poultry Research Center in Athens, solidifying the state's position as the center of the poultry industry". Consumers are demanding that growth promoting antibiotics be banned while antibiotics used to prevent disease still being allowed.  In order to maintain poultry health everything from their diet to farm management techniques have to be reevaluated and researchers must collaborate with veterinarians and scientists to determine what is the best way to keep chickens healthy which in turn will keep the Georgia economy healthy.
"As additional consumer interest in chicken health continues to grow, Georgia researchers are also developing new biosecurity innovations, focusing on creating technologies to improve the energy efficiency of poultry housing and providing comfort throughout the life cycle of the bird. All of this has implications for improving Georgia's agriculture economy, 40 percent of which comes from the broiler chicken industry.
"There's a much bigger need for multidisciplinary solutions to technical problems, which are getting more complicated to solve," says Applegate. "There's no other place in the world that has nearly 70 scientists focusing on poultry. I'm proud of the range of things that we do in an industry that's constantly evolving"(Healthy chickens for a healthy economy, 2018).
Date Posted: Feb. 06, 2018. ​

Featured Video: Antibiotic Use in the poultry industry

This video shows how antibiotics are used in the Poultry Industry.