Combie is a very sweet rooster which is why he got the nick name Sweet Rooster Boy. His first name was "Runner" but after his comb developed, well you can plainly see why Combie was a more appropriate name. Combie suddenly went lame in his old age and had to have a wheel chair. He is a very calm and very loved pet chicken. After hearing about Combie, watching his video's and hearing his story, we were inspired by his adorable, sweet personality. His story will touch your heart. This is our Tribute to Combie. 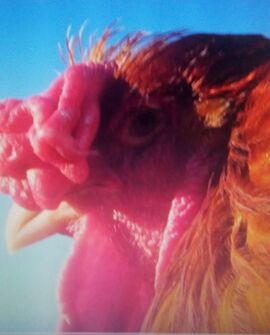 Combie-Sweet Rooster Boy
Combie had six brothers when he was rescued by his owner ​Colorful Canary (Not her real name). Combie and his brothers were all big boys weighing in at a whopping 15-17 pounds each. They spent their days playing, eating lots of organic treats, and spending time foraging around in the garden with their owner and her husband in the workshop. Each of the brothers had unique personalities and were well loved. Their owner's loved them so much they had to fight in court to keep their boys. During the fight with the city they purchased some property in the country while the court case was ongoing, just in case they didn't win. They won their case but moved the brothers to the country just the same. All of the boys were very intelligent and one of the brother's was a bit crazy. His name was Chicklet. Due to the fact, that there were so many of them it was difficult to get to know the boys individually. One by one the boys passed away from old age. Two brother's were left Rooey and Combie and after Rooey passed Combie was left all alone. Winters are very cold where they live so they made a decision to bring Combie in the house for the winter. During this time, they were able to develop a close relationship with Combie one on one. Combie turned out to be far more intelligent than previously thought as they were able to teach Combie to get grapes with a toy telephone. (See Video below). He learned that different buttons on the phone would get him different types of treats like lettuce, tomatoes, and grapes which each had a different color on his toy phone. Combie was actually able to ask for what he wanted by pushing a particular colored button that represented the treat he wanted. Combie the sweet rooster boy developed leg problems and could no longer use his legs  (See Video Below), so his owner's husband built Combie a very special walker to help him walk again. (See Video Below). Combie loved to watch television and had two favorite shows-Happy Feet and The Bee Movie. While watching Happy Feet a shark would appear and Combie would act frightened. Combie even got a special 9th Birthday. (See Video Below) and you won't believe how smart he is in the rain~ (See Video Below)
"Chickens are wonderful pets, just like any pet, with proper care, training and spending time with them, we can actually develop good relationships and a better understanding of their personalities and intelligence. Combie passed away peacefully in his comfy bed watching television, he and his brothers were wonderful, beautiful birds and will never be forgotten"--Colorful Canary.  See Combie's video's below. 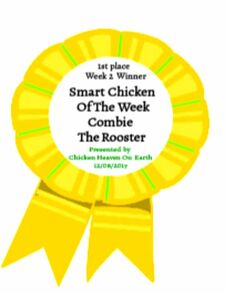 Congratulations Combie The Sweet Rooster Boy! He has won an award from Chicken Heaven On Earth Smart Chicken Of the Week Contest-Week 2 for his video's, particularly the one listed below where he orders grapes with his toy telephone. (Click on award to view it).
​Scroll down to see more video's of Combie eating watermelon, getting a new walker and more. We LOVE Combie.

Featured Video: Chillin' with combie the Rooster in the greenhouse

Combie is Very Smart! He Has a Very Unique Way of Asking for Grapes

Combie learned how to get organic grapes from his owner. He uses a toy telephone! See How Smart Combie is!

Combie at 9 years old has not suffered the ill fate of many elderly chickens who end up in the soup pot or culled to reduce the feed bill. To the contrary, Combie gets pampered with organic treats. Watch as he thouroughly enjoys his organic watermelon while listening to music.

Combie gets a very special treat for his 9th birthday party and he obviously loves it!

Combie-Smart Old Rooster In The Rain

Combie demonstrates his cognitive abilities in this video and just how smart he is...nobody trained him to do this!

Though getting on in chicken years, Combie being now 10 years old was fine one day and the next day he started limping and even walking backwards. What could be wrong with Combie his owner tried to find out. Watch Combie and see if you can tell what is wrong.

Combie Gets a Chicken Walker

In a desparate attempt to help Combie walk again his loving owners built a chicken walker for him. If you have a chicken with leg problems this little DIY walker could be just what you need.

Combie is gone now but his loving owners have created a beautiful video as a tribute to his memory.
We love chickens, we rescue chickens, and we love a good chicken rescue story. See more rescued chicken stories here:

We find the smartest chickens in the world and give them an award. Check out more intelligent chickens who have won awards You may be surprised at just how smart chickens really are:
​Chillin' With Combie The Rooster - Pet Chickens - Weekend Wellness. (2018). YouTube. Retrieved 2 March 2018, from https://www.youtube.com/watch?v=_dbpcBOTMLE&t=4s
Use the search box below to find what you are looking for on our website.
About Corona Virus Covid 19 and Chickens. Studies show you cannot get Covid 19 from chickens or other livestock. The Covid 19 strain found in poultry and livestock is NOT the same strain that is currently spreading across the world in humans. Keep your chickens coops and all supplies clean and sanitized to protect your chickens.
Can't find what you are looking for on our site? Try Google Search