Combie the Rooster Has a Unique Way of Asking for Grapes! 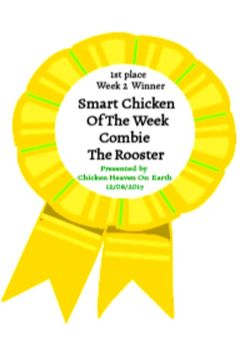 I'll bet you have never seen a rooster ask for grapes with a toy phone before! Combie is an old  but very smart rooster who has learned a great new trick just so he can get his treat which he obviously loves-grapes.  Combie is so smart he even won Smart Chicken of The Week Award-Week 2 presented by Chicken Heaven On Earth.

"You can teach an old cock new tricks :D. I recorded this a few weeks ago, before Combie became ill. Wanted to show just how smart chickens can be. :)" (Colorful Canary, 1) Find out more cool stuff about Combie below the video.

Find Out More About Combie The Sweet Rooster Boy

Combie was rescued with six brothers, his owner's fought to keep him and his brothers inside city limits, he went lame, and his owner's made him a wheelchair! Combie also won an award for Week 2 Smart Chicken of the Week-Find out more about this unique chicken here: Go to Combie's Story
See Combie's Story

Christine Nicol, (Bristol University professor of animal welfare) reviewed 20 years of research on the topic of chicken intelligence said it is wrong to think of chickens as being stupid stating that they have many hidden depths’. Chickens were given a choice between two or three plastic eggs, they would inevitably choose the more eggs. Even when researchers would move the eggs from one group to another the birds would choose the larger group. Newborn baby chicks could keep track of numbers up to five, indicating cognitive and mathmatical abilities. In further experiments the chickens showed more interest in a diagram of objects which could be built rather than one that defied the law of physics. The birds were able to understand that even if an object was moved out of their view it still exists. This study showed that human children are usually around a year old when they are able to grasp this same concept. Other traits discovered in this study demonstrated that chickens show basic empathy, can plan ahead, and self control which was proven in one study where 93% of the hens were given food for a longer period of time if they waited longer to get it (McRae,2).

See Other Chickens Who Made Smart Chicken Of the Week

People are Pampering Their Chickens!