A Comparison Between Dogs & Chickens As Pets

Comparison study on dogs vs. chickens as pets plus watch our featured video: Pet Rooster Mokiki with His New and Improved Toy. Here is an interesting study Chicken heaven on earth did to compare the differences between dogs and chickens as pets. Even though there are huge physical differences between dogs and chickens there are some interesting similarities in personality traits. Of course, the decision of whether or not to have a pet dog or pet chicken is your choice and you can have both if you like. This study was based solely as a comparison study of intelligence levels personality, and characteristics of each. We think you will really be surprised at the results!

Chickens Vs. Dogs As Pets-Study Results 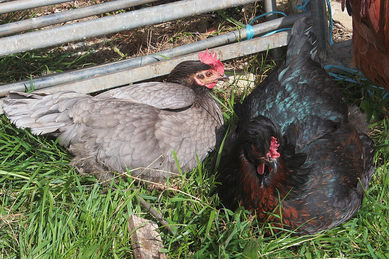 Behavior study results:
Who learns faster? Dogs or chickens?
Chickens, that's right chickens we studied responded correctly to training techniques days before puppies and adult dogs. Out of 45 chickens who were taught for 1 to 2 minutes to do something the chickens learned faster than dogs. Chickens could learn an obstacle course and do it correctly within a few hours while teaching 45 dogs to do a similar obstacle course took weeks of training.
Learning colors:Chickens could learn and differentiate colors in minutes while dogs seemed to have hard time distinguishing the difference at all.
Leash training: Dogs trained much faster on leash training than chickens did. 41 dogs out of 45 perfected walking on a leash within one week with daily one hour training sessions while only 15 of the 45 chickens tested correctly responded to the same type training sessions.
Housebreaking (Potty training): Over a two week period of the dogs and chickens tested, dogs accepted potty training much faster than chickens did and some dogs(10%) but more chickens refused to be potty trained than did dogs.
Affection: 43 dogs out of 45 accepted affection and responded positively while only 37 of the chickens tested accepted and responded to affection. It is interesting to note that of the 37 chickens that did accept and respond to affection were birds that were handled daily. Free range birds who were rarely handled did not like to be petted or picked up.
Playfulness: Dogs hands down were more playful as far as interacting with humans. Roosters would respond to prodding but in a more aggressive threatening way.
Treats and Clicker Training: Chickens seemed to learn faster and be more interested in constructive training techniques involving treats for a reward or clicker training and liked being petted while dogs did better with clicker training techniques and seemed to get distracted while training with treats. It is interesting to note that many programs which teach people how to train dogs first teach them how to train chickens because chickens learn faster.
Care: Chickens were easier to take care of because with the right feeders and waterer drinkers you could feed them once per day (keeping feed and water available at all times is essential to their health and survival) or once a week depending on the size of your feeders. Dogs needed to be fed at least two times per day.
Taking them to Potty: Unless you have a doggy door dogs require you to take them outside for exercise and to potty at least four times per day. Chickens get let out in the morning by you and go back in their hen house at night on their own and you only need to go lock the door.
Home inconveniences: Dogs shed fur all over the house, frequently get infested with fleas which also get all over your house, and oftentimes have "accidents" inside the house while you are away (sometimes when you are home too). Chickens live in their own coop outdoors so neither of these things are an issue, unless you have a housepet chicken which in most cases they wear diapers which need to be changed every few hours.
Chickens give back: Female chickens (hens) lay eggs. Dogs do not lay eggs.
Companionship: Most dogs make good companions and tend to be very loyal and protective of their owner's. Rooster's get very protective of their owner's if the owner spends time training and giving them affection some roosters will even snuggle up to you. Hen's are not protective of their owner's but will snuggle up to their owner's and most do not mind being petted and even seem to enjoy it.
Playing Fetch: So far we have not successfully got a chicken to retrieve a ball, stick or any other item. Of the dogs we tested 32 of them learned to play fetch within a week and seemed to enjoy the game, while only 15 would instigate the fetch game themselves.
Eating Bugs: Dogs do not eat insects while chickens do eat bugs in your yard so they make a good form of insect control.

Pet Rooster Mokiki lives in the house with his owner because he was injured,the weather was turning cold and it was unlikely he would make it through the winter without her assistance. He bonded with his owner during this time and has become quite a pampered chicken as you can see from the video he obviously gets attention, has toys, and wears a chicken diaper.This is what she had to say about her adorable pet rooster-"He's crazy. He sleeps in bed with me, he begs like a dog and thinks that I am his hen. He's a beautiful rooster and I love him. He's under pressure, because he has reached adolescence and seriously needs a girlfriend (other than my slippers). He's named after the SNL 'Sloppy Swish' video. All that he had was a tuft of hair left on his head, and I saw that video, and finally after 3 months he got a name. He answered to it immediately. He also loves to listen to Gangnam Style, and the Fritos commercial with the goat. He rides in the truck with me, and has gone shopping with me so many times. Everybody loves Mokiki! I've made many of these red Solo cup contraptions, but I think that I did it up really well today. I layered 4 of them with an angle brace inside, securing the cups, and tied a big red jingle bell inside of it. He keeps wearing himself out with it. (it's great!)".

Check out our Smart Chicken of the Week!

We know some of the smartest chickens in the world and each week we feature a new smart chicken..if your chicken is smart and you have sent us a video or put it on Youtube..your chicken may be one of our Smart Chickens of the Week. Check out these Smart Chickens

Find Out Great Stuff About Rooster's!

​Find out about rooster's-the forgotten bird! How to keep roosters quiet, How roosters are as pets, Using rooster's as home alarm systems, The homeless rooster, Rooster vintage signs, Reasons to adopt a rooster, Rooster mating rituals, Rooster art cutting board, What happens to baby roosters in the commercial egg industry, and more...
References:​
Use the search box below to find what you are looking for on our website.
About Corona Virus Covid 19 and Chickens. Studies show you cannot get Covid 19 from chickens or other livestock. The Covid 19 strain found in poultry and livestock is NOT the same strain that is currently spreading across the world in humans. Keep your chickens coops and all supplies clean and sanitized to protect your chickens.
Can't find what you are looking for on our site? Try Google Search