Cheap Ways to Stop Hawks From Getting chickens 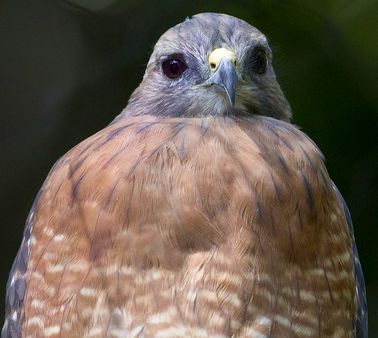 Here is a list of various ways that people use to prevent hawks from getting their chickens, cheaper methods than covering the coop and run and the effectiveness of each. Poultry netting or chicken wire covering the top of coops and runs are the best way to keep hawks and owls away from your chickens. Strategically placed scare tape helps alot too. However, if you cannot afford to cover your coops and runs yet, these helpful videos and tips could be of some use to you.

Best Way to Protect Your Chickens From Hawks 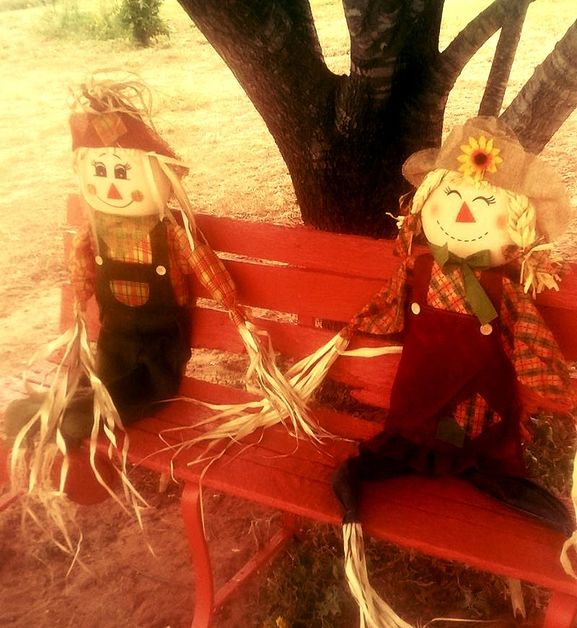 The best way to protect your chickens from hawks is to cover the runs with chicken wire or poultry netting. My chickens free range on two acres of land so it is practically impossible to cover the entire property with poultry netting. I have found ways to protect them and am sharing them with you here. I feed my chickens indoors or under a loafing shed. When hawks see chickens feeding they know they are easy pickings. Hawks like to perch in trees and wait for the perfect opportunity. I don't have many trees on my property but there are trees all around my property. One so far successful way to deter hawks in an old fashioned remedy for crows with a twist. I build a scarecrow and use solar powered, red flashing lights for the eyes. The flashing eyes do little to deter the hawks but have been quite successful at keeping owls away. I have used motion detect sprinkler systems which works extremely well at keeping hawks away in the summer, with one huge problem, it gets the chickens wet too. In the summer time my chickens like to play in it. They are smart and know exactly how to trigger the water sprinkler. Unfortunately, the ducks have figured it out too and it ends up wasting a lot of water. I have quite a bit of success at keeping hawks away with motion activated owls placed atop the chicken coop, and scare tape. One viewer uses small plastic bags tied to tree branches to keep hawks away but admits the bags come loose and end up flying around the property. 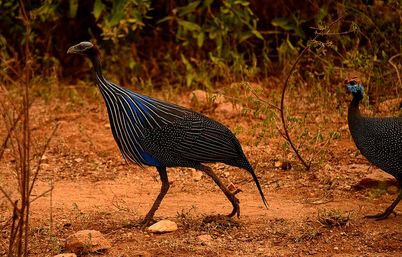 Guinea Fowl
My guinea's grew up with my chickens so they are very protective over the chickens. There are lots of hawks in the area of Texas where we are located. I do a head count on my birds when I let them out and at again at night when they roost. When a bird comes up missing I go looking for them. On occasion I will find a scatter of feathers but no chicken. This is a pretty good indication that the chicken was snatched by a hawk. Suddenly, I stopped having problems with hawks. They still come around but they do not feed on my chickens. One day I heard a loud commotion amongst the birds, thinking a couple roosters may be fighting over a hen I ran out to break up the fight. Too my surprise three of my guineas had what appeared to be a bantam chicken cornered. The guineas were in full attack mode. I chased them off the poor bird only to discover that the bird they had cornered was a young hawk. The hawk just stood there and looked at me almost as if, it were thankful I had rescued it. It had beautiful golden eyes and beautiful golden feathers. I was standing there with a shovel in my hand that I had grabbed on my way to the commotion because I never know what I might be confronting when the birds are upset. Everything in my gut told me to do something to harm or kill this bird but the look in its eyes and the fact that it is illegal to kill them stopped me in my tracks. I didn't know what to do, so I just stood there and watched this beautiful creature that would shred my chickens in seconds. The bird made eye contact for more than a minute, neither of us moved. Finally, the bird began pecking at some corn that was on the ground and I could clearly see where the guinea's had bitten into the hawks leg. The hawk was clearly injured. I waited as it ate and kept looking up at me. I stood less than three feet from the bird. The guineas meanwhile were plotting another attack. I seen them coming and I could have let them finish off this hawk but the part of me that loves all birds refused to let me and I started walking toward the hawk and talking to it, asking that it please not harm my chickens. Then the hawk flew away, in a struggling flight, apparently it's wing also had been injured. The guineas squawked until the hawk landed in a tree on the property behind me. That hawk recovered but unable to hunt due to it's injuries the bird stayed close and returned to my property many times to eat corn. As the hawk grew I knew it was only a matter of time before it would come for my chickens but it never did. It has been five years now and that hawk sits in a tree on the edge of my property. It is the only hawk my guinea's allow near the property.

In my experience, a hawk will swoop down and snatch a chicken or baby chick while they are eating or drinking. So, I cover these areas with 3 sided little enclosures made by making a frame and covering it with tin. This helps protect the water from turning green in the sun, usually prevents water from freezing, protects the feed from getting wet in the rain, and protects the chickens from hawks while they are eating and drinking. Many people cover the entire run or at least, the food and water station with wire or poultry netting.

They Used Twine to Protect Their Chickens From Hawks

If you are not ready to make the investment to purchase chicken wire or poultry netting, this unique idea may help. Get a ball of twine if you do not have one laying around somewhere and make a grid pattern over the  top of the coop. According to Glenreynie on Youtube this method has worked for them. 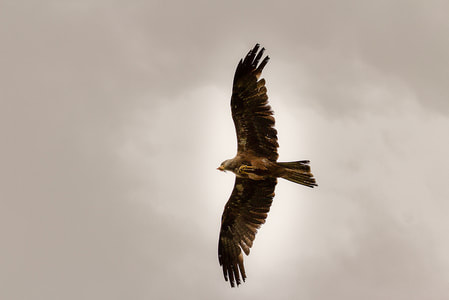 I was still seeing the crippled crooked flying hawk and his parents and his siblings circling around the area quite regularly but they were hesitant to land. Only the crippled one would dare to come for a treat. (Whole kernel corn seems to attract them). To discourage the crippled hawk I started feeding the chickens inside their coop which I do not like to do because it draws mice and other rodents to the coop. Then one day I started taking in stray cats when some people threw their kittens over my fence. I watched the kittens closely and reprimanded them with a firm "No" and chased them away from the chickens when they first arrived as they would watch the birds and try to pounce on the smaller ones. I didn't trust the cats so I started only letting them out by the chickens when I was there to supervise. This tactic worked fairly well but the chickens had a plan of their own. One day all five kittens were playing around the chickens and one of them decided to play with an adult hen. Betty Jo checked the kitten with a quickness by pecking it right on the nose and hard from the spot of blood that appeared on the kittens nose. The other kittens watched and all of them ran away. Another day, I had a bucket of feed in my hands and when I came out the coop, one of the kittens was crouched down about to jump on a hen. Mr. Brandy that hen's rooster was watching the kitten and when it leapt up, Mr. Brandy did too and he made quick work of terrorizing the kitten. The kittens never bothered the chickens again as they grew up. Once the cats became adults I noticed that the hawk family visits became less and less. This could be because the cats took out the rodent population which is the hawks primary food source or it could be that hawks don't like cats. (See more below).

In most places it is illegal to kill hawks. You may be able to catch a hawk with a hawk trap or snare but will need to call your local game warden to come and get the bird. The game warden will most likely go down the road and release the bird and it will most likely return to it's home..your property. Not to mention the fact that if you do catch a hawk, you take a high risk of getting hurt if you try to move or remove it from the trap. A hawks beak and claws are razor sharp, sharp enough to separate flesh from bone. I do not recommend trapping hawks.
More Ways to Protect Chickens From Hawks
Protecting Chickens from Hawks. (2017). YouTube. Retrieved 20 December 2017, from https://www.youtube.com/watch?v=Bnj7aYgjg10
Use the search box below to find what you are looking for on our website.
About Corona Virus Covid 19 and Chickens. Studies show you cannot get Covid 19 from chickens or other livestock. The Covid 19 strain found in poultry and livestock is NOT the same strain that is currently spreading across the world in humans. Keep your chickens coops and all supplies clean and sanitized to protect your chickens.
Can't find what you are looking for on our site? Try Google Search