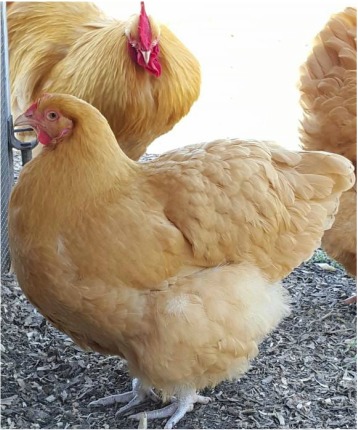 Buff Orpington's photo from White House Farms. https://www.facebook.com/whitehousefarmpoultry/
Origin: Great Britain.Sweet natured, hardy, docile, quiet very affectionate, and get along well with other birds.
Egg color can vary from light brown to an almost pink color
The hen's are hardy and good brooder's and mother's. They are very protective when they are brooding and even more so after their chicks have hatched. The Mother chirps to her young peeps and shows them how to eat and scratch. They follow her around. If your dog or cat happen to wander near her she will attack them.
Rooster's are flirtatious and fiercely protective. I have even had one that sit on the eggs while the motherhen took a break away from the nest.
Most Buff Orpington's are a gold/yellow color but it is not unusual to find a Black one with opalescent hues of purple and turquoise reflecting in the coloring of their plumage.
Comb: Can be yellow, light pink or red
Cock Weight: 7-10 lbs
Hen Weight: 7-8.5 lbs.
Egg Color: White or Light Beige
Temperatures: Can withstand temperatures between 45F-90F.
Dual Purpose Bird
See more photo's of Buff Orpington's below.

A Bit of Interesting History On The Buff Orpington Chicken 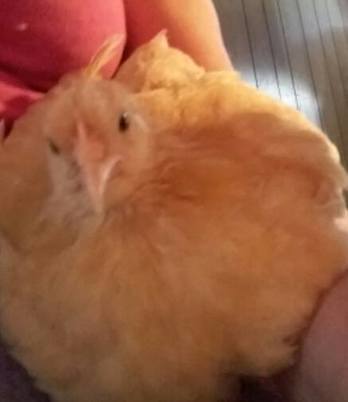 Buff Orpington Pullet at Chicken Heaven On Earth
The Buff Orpington was once considered as an endangered species by The Livestock Conservancy. During the 1800's there was much public interest in new chicken breeds, then called "Hen Fever". As this rush of interest died down people were wanting dual purpose American chicken breeds which were being introduced in England. The Buff Orpington was one of these breeds of chickens, wanted for their practical dual purpose qualities, however many of the British preferred white skin and the Orpington's had yellow skin.
"William Cook was a humble coachman living in the Kentish town of Orpington, in England, and he had an idea. He began crossing Minorca roosters with Black Plymouth Rock hens, and then the offspring to clean-legged Langshan chickens. His goal was to develop a hardy, fast growing chicken that laid well and yet had the table qualities the British market sought. In 1886 he introduced his creation to the public – it was a success and within 10 years Orpington chickens were well established in England and began to be exported to other countries". William Cook was rewarded financially for his efforts and became quite succesful as he continued his breeding efforts to develop specific body and productive traits in his birds and as a result he created many different varieties of Orpington chickens. Black orpingtons, White orpingtons, Buff Orpingtons, a Speckled Orpington  called Jubilee, and the Spangled (Mottled) Orpington. His son in law developed the Blue and Cuckoo orpingtons. Orpingtons arrived in America by 1891 and in 1903 William Cook personally brought a large import of orpingtons to show them in America. The farmers in mid western states really liked the Buff Orpington because of it's beautiful gold color and superior table qualities. The sale of Buff Orpingtons continued to rise until the depression era around 1912. Buff Orpingtons were primarily favored because they grew fast, were excellent egg producers and excellent meat birds weighing in at 2 to 2.5 lbs by the time they reached 8-10 weeks of age and were ready for roasting by 5 months of age. These beautiful birds were even entered into the first egg-laying contest which was held at North Yorkshire farm of Simon Hunter of Northallerton, England in 1887 (Livestock Conservancy, 1).

Motherhens Tip: Hen house should be lighted indoors at night. Chickens do not move around in the dark and will not run or try to protect themselves from predator's which may have found a way into the hen house if there is not light.--Motherhen 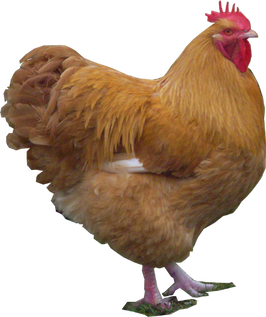 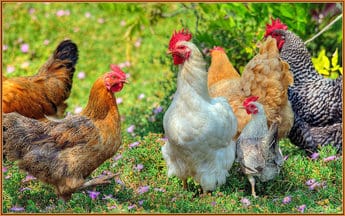 Get the Best Chicken Care Tips! 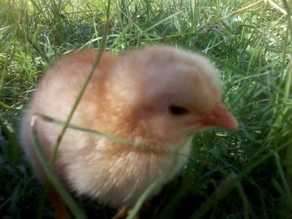 Through experience and research we find the best tips for taking care of chickens. Check out how we do it at Chicken Heaven On Earth. Go to Chicken Care Info
Go to chicken care info

See What Pampered Chickens are Getting! 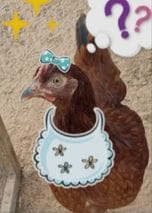 Unless the Lord builds the house, those who build it labor in vain. Unless the Lord guards the city, the guard keeps watch in vain. It is in vain that you rise up early and go late to rest, eating the bread of anxious toil; for he gives sleep to his beloved. Psalm 127:1-2
References:
Use the search box below to find what you are looking for on our website.
About Corona Virus Covid 19 and Chickens. Studies show you cannot get Covid 19 from chickens or other livestock. The Covid 19 strain found in poultry and livestock is NOT the same strain that is currently spreading across the world in humans. Keep your chickens coops and all supplies clean and sanitized to protect your chickens.
Can't find what you are looking for on our site? Try Google Search