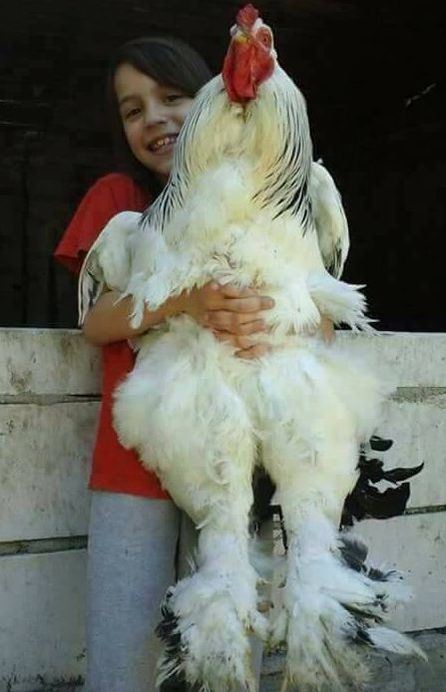 Photo used under Creative Commons license from Aung k.. Myint. Facebook.
Brahma Chicken breed information,In this photo posted by Aung K. Myint you can clearly see this is no ordinary chicken. See more photos, videos, and get detailed breed information and facts about this gentle giant here.​ The Brahma video which took the internet by storm and photos of Jeton Halitaj show just how big these birds can get. See detailed information about the Gentle Giant Brahma chicken which includes their controversial origin, plumage color, feet and shank color, comb type, weight, and egg color plus great deals on stuff for chickens. (See below).

About Brahma: The Gentle Giant 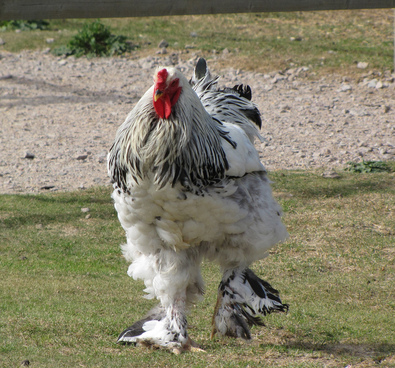 The Brahma Chicken Video that has the internet crowing and clucking....

The Brahma chicken video that has taken the internet by storm and been broadcast on many news channels.

When you see these photos of Jeton Halitaj with his Brahma Light roosters-The Kings and his Big Mama Brahma hen you can see clearly that these are not your average sized chickens. These chickens are almost the size of a small child and bigger than many small dogs. Despite their huge size, they have a sweet disposition and do not mind being handled as you can clearly see. Love these Brahma Light Chickens! (Photos and videos used under creative commons and with permission from Jeton Halitaj).

This is an awesome video of a Brahma Chicken Family being fed blueberries which is a perfect demonstration of just how beautiful, family oriented, and friendly these beautiful birds truly are.

Origin of the Brahma-Chicken Breed Information

"Few breeds have as much controversy as to their origins as does the Brahma chicken. While many varied claims were originally accepted as fact by early authors, the truth of the matter is that this breed was developed in America from very large fowls imported from China via the port of Shanghai. It also seems clear that Chittigong fowls from India (now Bangladesh) were used to a very small degree and stamped head and comb characteristics onto the breed – differentiating it from the Shanghai breed (now known as the Cochin). In those early days it should be remembered there were no written standards, no poultry associations, and no registries. Since, what became known as the Brahma chicken was being presented under at least twelve names, there was much confusion. The credit for shortening the name to Brahma goes to T.B. Miner, publisher of The Northern Farmer, who in 1853 or 1854 did so for very practical reasons – saving space on the printed page!

In December 1852, to promote his stock, Mr. George Burnham shipped nine of his finest as a gift to H.M.G. Majesty Queen Victoria of England – making sure the gift was much publicized. Prices jumped from $12-15 per pair to $100-150. Burnham’s stock proved of quality and formed the basis for the Dark Brahma variety – which was developed in England and later shipped back to America. Dark Brahmas tended to be about one pound lighter in weight than the Light Brahma".-(The Livestock Conservancy).

"The Brahmas are a very old breed from Asia, probably originating in India and brought to this country about 1850 by Yankee sailors on their return from trading in Far Eastern ports. Because of its massive size, full feathered shanks and toes, and striking black and white plumage pattern, it has always been one of the most interesting varieties to work with. Brahmas are exceptionally quiet, gentle, and easy to handle. Their small pea comb, great size, and heavy plumage make them almost immune to cold weather. The hens are good layers of brown eggs, especially in winter, and will also set.  Baby chicks are creamy white, but some have shades of gray on the back". (Murray McMurray Hatchery)

Buff Brahma's are light Brahma beautiful and sweet. A smaller version of the gentle giant. Find out more about them here: Go to Buff Brahma's
Buff Brahma's >>>

Now Take a peep at the smallest chicken in the world

Serama Baby Chicks-Just hatched. Photo from Funny Chicken Memes on Facebook. https://www.facebook.com/funnychickensmemes/
Now that you have seen the largest chicken in the world you might want to take a peep at this tiny little chicken. The Serama Bantam is the world's smallest chicken. Go to Serama Bantams
Serama Bantams >>> 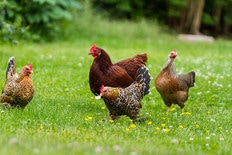 Trust in the Lord with all your heart and lean not on your own understanding; in all your ways acknowledge him, and he will make your paths straight. (Proverbs 3:5-6)
Reference:
1. Video.​https://www.youtube.com/watch?v=JWSrXUQNCtg
2. Brahma's. Retreived on Dec. 19, 2017. The Livestock Conservancy. http://livestockconservancy.org/index.php/heritage/internal/brahma
3. Light Brahma. Retreived Dec. 19, 2017 from Murray McMurray Hatchery. https://www.mcmurrayhatchery.com/light_brahmas.html
4. Dark Brahma. Retreived Dec. 19, 2017 from Murray McMurray Hatchery. ​https://www.mcmurrayhatchery.com/dark_brahmas.html
5. Video: The Brahma Chicken. The Brahma is the largest chicken developed in the United States. ​https://www.youtube.com/watch?v=Pi5J-jhq6c0
​
#chicken breed, #brahma chicken, #brahma photos, #video of Brahma Chicken, #chicken, #types of chickens, #chicken heaven on earth, #revpennydean, #breeds of chickens, #information about brahma chickens, #brama chickens, #brahma size, #brahma egg size, #brahma appearance, #brahma, #feathered feet, #light brahma, ​
Use the search box below to find what you are looking for on our website.
About Corona Virus Covid 19 and Chickens. Studies show you cannot get Covid 19 from chickens or other livestock. The Covid 19 strain found in poultry and livestock is NOT the same strain that is currently spreading across the world in humans. Keep your chickens coops and all supplies clean and sanitized to protect your chickens.
Can't find what you are looking for on our site? Try Google Search