How to Stop Bobcats From Killing Your Chickens

Facts about bobcats and chickens, how to protect your chickens from bobcats, things that attract bobcats to your chickens and your home,  physical characteristics and habits of bobcats, and .ways to get rid of them.

Bobcat's (Felis rufus) are dangerous and highly skilled chicken hunter's who can take down prey that weighs 8 times more than they do. They are quick, aggressive, skilled hunters with retractable claws and teeth so sharp they can separate the bone from the flesh of a chicken in a matter of seconds and your average house cat, barn cat or domestic dog is not likely to survive a confrontation with a bobcat. Like any animal in the wild they will not usually approach a populated area preferring to hunt alone in the wild. However, when food is scarce the bobcat has been known to approach residences and chicken coops looking for new sources of food. One bobcat can take out a small flock of chickens in a short period of time killing as many as ten or more in an hour. You can use solar powered predator control night lights to intimidate a bobcat. When they see the red light they think they have been discovered and will look for another place to hunt. Be sure to move the night light regularly. Bobcats are smart and if they figure out the light never moves they will not be afraid of it. It is a good idea to use security camera's and live traps to detain the bobcat until you can call animal control to come and get them. If you are unsure of what kind of predator is attacking your chickens you can use a security camera to monitor the coop. This will let you know what is after your chickens so you will have a better idea of what you need to get rid of them. Prevention is a critical key when it comes to chicken predators. It is important to eliminate anything that may attract a bobcat. Scroll down to see things that attract bobcats, how to catch them in live animal traps, and more.

What a Bobcat Looks Like-Physical Characteristics 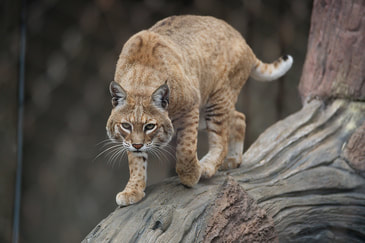 Bobcat with slightly longer tail
Bobcats have ruffs or fur on both cheeks, a sandy colored coat with dark spots, long strong legs, and a short tail with a black tip. Usually they weigh about 20 lbs. although there have been many reports of bobcats larger than this (Snedeker and Sonoran 2011).

You Can Catch Bobcats in a Live Animal Trap 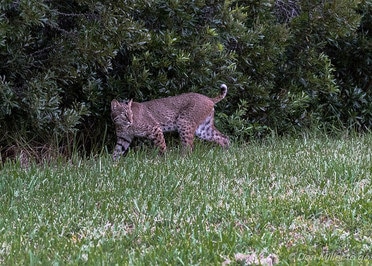 Safely and humanely stop bobcats, raccoon's, opossum's, and other small animals from harming your chickens, destroying your garden, or getting in your trash by using a live trap with a spring loaded door. Use eggs, cat food, dog food or raw chicken for bait. Make sure the trap is staked down or tied and hanging inside the trap bait station, but not blocking movement of the door. Stake your bait down if you can or scatter it inside the cage so the bobcat will have to reach for it several times. After you catch one call your local animal control and they will come and get it. Be sure to trip the trap before you let your chickens out in the morning or you may catch one of your chickens. Also, make sure your cats and small dogs are put up or you may end up catching them. See what things you need to remove that attract bobcats below.

Remove Things That Attract Bobcats to Your Chickens 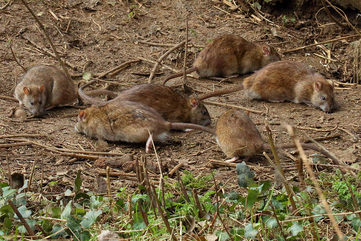 What Bobcats are attracted to
Chickens and their young are a prime targets for bob cats because of their animated movements they naturally attract the bobcats attention. The bobcats primary diet is rodents and rabbits but have been known to eat birds, chickens and in rare cases, larger hoofed animals.
One viewer says bobcats are attracted to his chicken farm because he used to leave dog food out at night. Basically, bobcats are also attracted to water and food sources, so it is a good idea to keep your chickens water in a covered container and empty small pools or other water sources, if possible.
Keep Feed in air tight container's
Many experts say keeping food put up will deter the  predators Do not leave feed, pet food or anything that will carry a scent to a hungry predator that could be identified as food outside over night.
One viewer suggest leaving food out for them so that they will not be hungry enough to eat your chickens but this is probably not advisable because the idea is not to attract them.
Another viewer says getting a livestock guardian dog or several that has been raised around the chickens since it was a puppy  or chaining a large dog just outside of the hen house or yard will deter the bobcat. One neighbor of mine says his dogs have killed bobcats and he has one large dog and two small black and white mutts but he has few if any predators that survive his little dog pack.
How to get rid of Bobcats
Your best bet is to get and set a live trap using raw meat for bait after making sure your chickens are locked safely in the hen house, get rid of mice, rats, other small rodents, and rabbits. Keep any kind of chicken feed, dog food, cat food in air tight, sealed containers, empty water dishes at night, and eliminate other water or feed sources. You can also use Nite guard Solar Powered Predator Protection-Led lights to help discourage them from coming on your property in the first place. Scroll down to see traps and Nite guard lights. (See How to get rid of  mice and rodents in your coops and yard)
​​Solar powered electric fencing may also help but some smart bobcats have figured out how to jump over them. 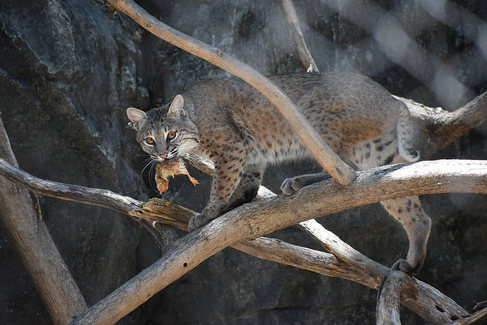 Bobcat with a small bird or baby chick in it's mouth
​"In the Sonoran Desert, bobcats prey upon a wide variety of organisms and they can live pretty much anywhere there is a steady supply of resources. Being solitary ambush predators, the majority of their diet consists of rodents and lagomorphs (rabbits), but they also frequently eat birds, reptiles, carnivores, and ungulates (hoofed animals) (Hass 2009). A study of bobcat scat found 65% of their diet to be rodents and lagomorphs while the other 35% contained everything else mentioned above. Bobcats were also found to be spread somewhat evenly throughout grassland, scrub, woodland, and riparian areas (Hass 2009). Natural enemies of the bobcat are coyotes, birds of prey, wolves, and mountain lions (Snedeker and Sonoran 2011).

Bobcats Can Be found in urban areas 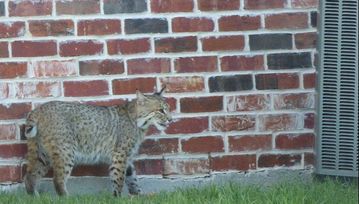 Bobcats are not just out in the country, they frequent urban neighborhoods as well, as many people who are raising chickens in urban areas have found out either by spotting them on their camera, catching them in a trap, or worse, found their chickens slaughtered by them. "As human populations continue to grow and expand rapidly, the world is becoming increasingly urbanized. An urban area is an area that has a large number of people and buildings making up at least one town or city (Gehrt 2010). As more and more places become developed, certain animals are becoming attracted to urban areas because they can provide resources for wildlife such as water, food, and shelter among other things"((Snedeker and Sonoran 2011).

How to Trap a Bobcat in a live trap 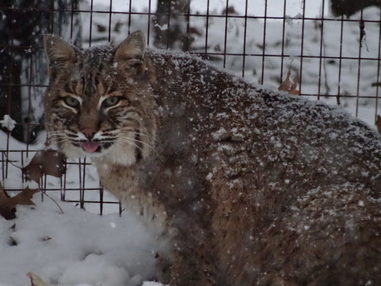 Bobcats are smart. Choose your bait. Bobcats prefer live bait but I do not want to sacrifice one of my chickens or any other live animal to trap a bobcat so I have found that hanging a squirrel tail in the cage and using scent baits works very well. I have also caught them with canned cat food, and dog food. After you choose what bait you want to use and you set your trap, you will need to put dirt over the bottom of the trap to cover the cage floor. Put some type of covering on the sides of the trap to hide it and then just wait. Once you catch a bobcat you will need to call your local animal control or forest ranger and they will come get them. If you decide to release the bobcat in another area keep in mind you may be releasing it on someone's else's pets or chickens.