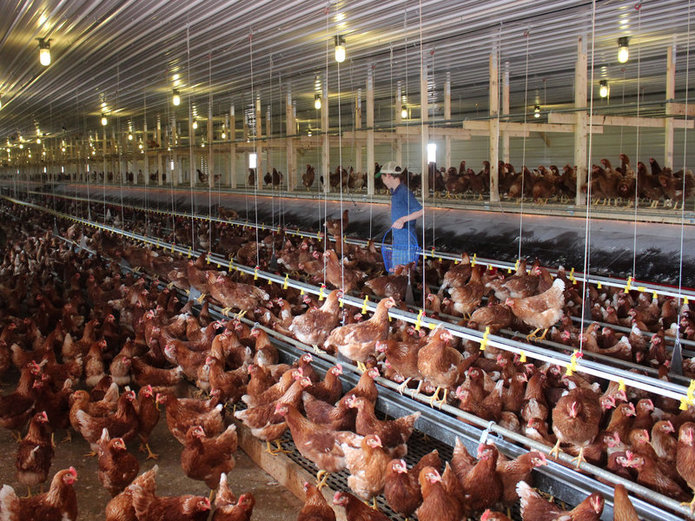 Cage Free Hens used in Commercial Egg Production. Photo Courtesy of A view inside a cage-free "aviary" chicken house, designed by Big Dutchman. Courtesy of Big Dutchman, Inc. (3).
Voters, legislators and consumers have obtained some relief for battery cage hens but the following video shows that the extra money spent on supposedly cage free eggs may give the hens a bit move movement and freedom but most are still not allowed outdoors. This is how far battery hens have come from living in battery cages the size of a piece of paper. Is the new cage free system ideal for laying hens? No, it isn't but it does allow the birds a small bit of freedom compared to the battery cage system but is still not even close to what egg producers would like you to picture. The illusion is that a lot of happy chickens running around free ranging outdoors but the reality is that most of them are still not allowed outdoors, they are still living in overcrowded living conditions even though most are not in battery cages any more. The upside is the hens can now exhibit some of their natural behaviors such as scratching around, spreading their wings, walking around, laying their eggs in a nest, and do not suffer from severe featherloss like battery cages. Some egg producers, even provide dirt baths for them. The downside, many of the birds take dirt baths in their own dried feces. Yes, it is better for the hens than living in a battery cage where crowded two, three or more into a cage no bigger than a piece of paper and could not spread their wings, spent their lives on cage floors which damaged their feet and legs, and could not move around.

If Not Cage Free Eggs-What Are the best Eggs to Buy?

If you cannot find someone locally who is raising their chickens in a truly free range environment where chickens are allowed outdoors to roam and do what chickens do, then you should buy eggs that say "Pasture raised". Pasture raised chickens are allowed outdoors and are more likely to be healthier and happier and happy, healthy chickens lay eggs that are healthier for you. The following video is meant to be funny but in fact shows the huge difference on how some commercial egg producers like Vital Farms are raising their pastured chickens for egg production. Kudos to Vital Farms.

A Study on Battery Cages Vs Cage Free Chickens in Michigan

"In Michigan, scientists are carrying out a large-scale experiment with three different full-scale chicken houses. One has chickens in traditional cages; one has so-called enriched cages that are bigger, and include nests and perches; and a third house is cage-free.
"We have over 300 cameras mounted within those systems to collect data," says Janice Swanson, from Michigan State University. She's one of the scientists in charge of the study, which is funded by a consortium of egg producers.
Swanson says they are measuring every aspect of each system: how clean the air is; how healthy the chickens are; how much it costs; how each system affects a chicken's welfare.
On the third floor of Michigan State's animal sciences building, teams of students are carefully watching videotapes, counting how often the chickens do things like spread their wings or peck each other.
Swanson says it's important to measure all of these things because there may be trade-offs between different goals.
For instance, in cage-free systems, chicken litter builds up on the floor, so chickens scratch around and dust-bathe in their own waste. "There are concerns about that, relative to egg safety," he says. "Now, for the hen's behavioral repertoire, this is cool! We can get down and dust-bathe, and so on."
The experiment has been running for a year now, and the scientists have released some preliminary observations.
Hens in cages were cleaner, but cage-free chickens kept more of their feathers. Cage-free hens may have had more freedom, but twice as many of them died during the year.
Swanson says it's too early to draw any firm conclusions, though, because these observations are from just one production cycle" (What The Rise Of Cage-Free Eggs Means For Chickens 2013).
Learn More About Battery Hens

Laying hens in the commercial egg industry who cannot produce the maximum amount of eggs expected come to a brutal end with this machine. Learn More

Do You Need Bedding Materials for Your Chickens? 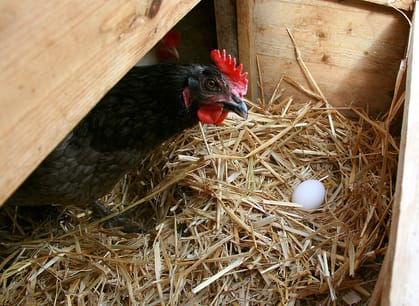 Bedding is a material used to cover the floor of a chicken coop and/or can be used in nest boxes where your chickens lay their eggs. Bedding should keep the coop dry without putting alot of dust particles in the air. Bedding on the coop floor should be loose enough to allow feces to fall through so that your birds are not walking on their feces which can cause bacterial infections, fungal infections, and breathing problems. Find out more about the types of bedding that can be used.
Best bedding materials for chickens
View a list of most commonly used beddings for chickens. Go to Best Bedding Materials for Poultry (Chickens)

Battery Hen Cage Updates-2016
​Ex Battery Hen shows extreme intelligence
​Battery Operated Hen House Doors-Best Buys
References:
1. ​What does 'cage-free eggs' mean?. (2017). YouTube. Retrieved 28 December 2017, from https://www.youtube.com/watch?v=7rE7v_xpzQk
2. ​Bullsh*t Free Eggs | The Difference Between Pasture Raised And Cage Free Eggs. (2017). YouTube. Retrieved 28 December 2017, from https://www.youtube.com/watch?v=bf3ENNjxhcg
3. ​What The Rise Of Cage-Free Eggs Means For Chickens. (2013). NPR.org. Retrieved 28 December 2017, from https://www.npr.org/sections/thesalt/2013/06/27/195639341/what-the-rise-of-cage-free-eggs-means-for-chickens
Use the search box below to find what you are looking for on our website.
About Corona Virus Covid 19 and Chickens. Studies show you cannot get Covid 19 from chickens or other livestock. The Covid 19 strain found in poultry and livestock is NOT the same strain that is currently spreading across the world in humans. Keep your chickens coops and all supplies clean and sanitized to protect your chickens.
Can't find what you are looking for on our site? Try Google Search