The Barnevelder was Once considered a Rare Breed 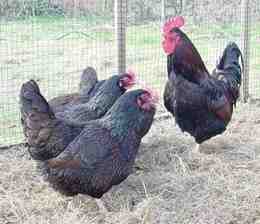 Barnvelder hens & rooster
Origin: The Barnevelder chicken breed was developed from a vintage local variety which was discovered in the 12th century. First seen in Barnevelder, Holland during the late 19th century.
Purpose: Show birds/Meat bird/Good egg layers
Color: Double-laced, Bule laced, White, Black and others
Comb: Single comb
Shank: Yellow
Broody:Yes if the nest area is quiet, private and comfortable and undisturbed.
Rare breed but has recently been more common due to the demand for dark colored eggs
Good free range bird that does well in confinement. They don't care to be handled by humans unless they were handled while growing up. These beautiful birds do well in cold climates. Scroll down for more information and  see our featured video ​​ 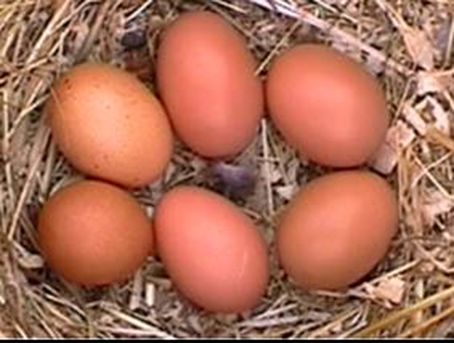 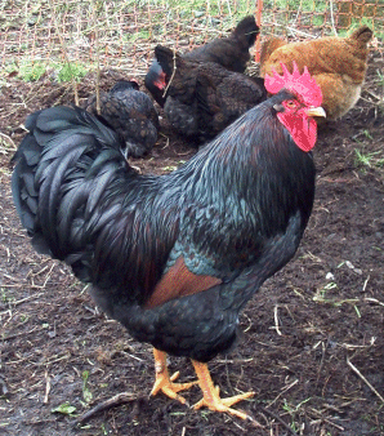 By Outback hens at English Wikipedia, CC BY 2.5, https://commons.wikimedia.org/w/index.php?curid=34906892
The Barnevelder chicken named after the town of Barnevelder in Gelderland located in the central Netherlands, is said to have been the result of cross breeding between local Dutch domestic chickens with Shanghai birds which had been imported to Europe from Asia in the late nineteenth century. The Shanghai chickens were cross breed among themselves and developed into breeds now known as Brahma, Cochin or Croad Langshan. It is possible that the birds may have also been cross bred with Indian Game Stock and the  Amerikaanse Nuthoenders (American utility birds) and in 1906 it is likely there was cross breeding with British Buff Orpington stock but according to Hans Schippers the Langshan chicken was the greatest influence on the Barnevelder chicken breed by contributing to the hardiness, brown eggs, and good egg layer production even during the winter. Barnevelder chickens were first exported to the United Kingdom due to a high demand for brown eggs  in 1921.

First Showing: Barnevelder chickens were first shown at the Landbouwtentoonstelling Agricultural Exhibition 1911 held in The Hague.
First Accepted as a Chicken Breed:The Dutch Poultry Club were deciding whether or not to accept the Barnevelder as a new breed in 1919 but there were too many variations in color of single laced, double laced and mostly partridge plumage. After the Breeders Association was formed the first breed standard was drawn up and the Barnevelder Chicken Breed was recognized in 1923 and the Partridge and double laced varieties were included in the British Poultry Standard with the double laced plumage becoming the principal variety. (Barnevelder, Wikipedia). ​
APA (American Poultry Association founded in 1873): Continental
EE (Entente Européenne d'Aviculture et de Cuniculture founded June 18,1938): Yes
PCGB (Poultry Club of Great Britain founded in 1877): Soft feather/Heavy

Trust in the Lord and do good; so you will live in the land, and enjoy security. Take delight in the Lord and he will give you the desires of your heart. Commit your way to the Lord; trust in him, and he will act. Be still before the Lord, and wait patiently for him. Psalm 37:3-5, 7
References: Barnevelder.Retrieved on Aug. 19, 2017 from Wikipedia. https://en.wikipedia.org/wiki/Barnevelder
Use the search box below to find what you are looking for on our website.
Can't find what you are looking for on our site? Try Google Search